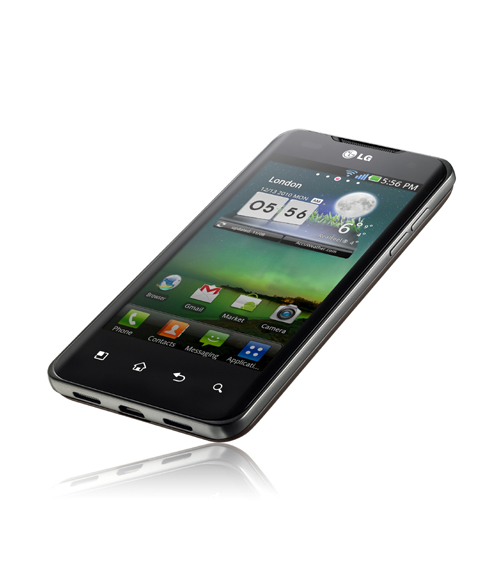 There’s no doubt what LG is trying to emphasize with the announcement of the LG Optimus 2X smartphone. You see that 2X in the name? That’s because it boasts the impressive dual-core NVIDIA Tegra 2 processor (1GHz) to run its show. And what a show it is.

You may have seen this phone floating around the rumor mills as the LG Star, but the name has been abandoned for the Optimus 2X moniker instead. This is the first time that we’re seeing a smartphone with that impressive chip under the hood, after all.

So, what kind of power does that processor provide to this Android 2.2 smartphone? Well, not only will it output full 1080p video to your TV via its HDMI-out port, but it will also record full 1080p HD video via its 8MP primary camera. There’s also a 1.3MP camera on the front for your video calls too.

Running through the rest of the specs, you find 8GB memory, microSD expansion, and a 4-inch WVGA display. There’s only a 1500mAh battery in there, though, so it’ll be interesting to see what kind of life you get when you really start to push the limits on this beast of a slim phone.

The LG Optimus 2X will show up in Korea next month. Europe and other Asian markets get it a few weeks after that. And North America? Well, we’ve got to ask the carriers about that.

On a side note, since Google is reportedly using Tegra 2 as a reference platform for Android 3.0, this phone could be ready for the big update whenever the Googs decides to push out some Honeycomb action.

“Dual-core technology is the next leap forward in mobile technology so this is no small achievement to be the first to offer a smartphone utilizing this technology,” said Dr. Jong-seok Park, CEO and President of LG Electronics Mobile Communications Company. “With unique features such as HDMI (High Definition Multimedia Interface) mirroring and exceptional graphics performance, the LG Optimus 2X is proof of LG’s commitment to high-end smartphones in 2011.”

Developed by graphics processor powerhouse NVIDIA?, the dual-core Tegra 2 system-on-a-chip found in the LG Optimus 2X runs at a clock speed of 1GHz and boasts low power consumption and high performance for playing video and audio. Users will experience faster web browsing and smoother gameplay compared with single-core processors running at the same speed as well as instantaneous touch response and seamless multitasking between applications.

The LG Optimus 2X will be available in Korea next month with countries in Europe and Asia to follow. The phone will initially be released with Android 2.2 (Froyo) and will be upgradeable to Android 2.3 (Gingerbread). The upgrade schedule will be announced in local markets in due course.