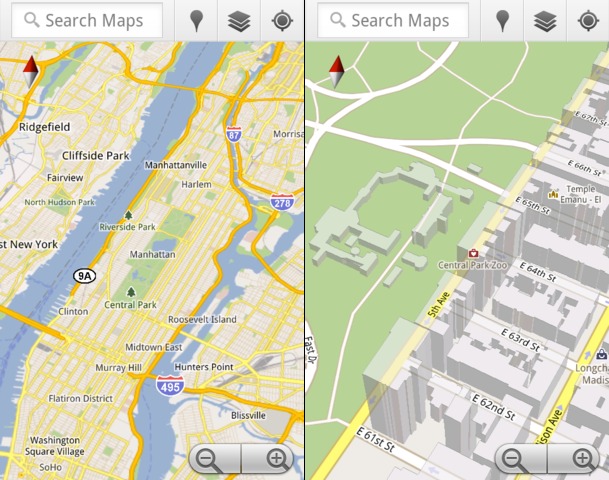 Google Maps 5 has three key new features that truly redesigns the product’s usefulness: 3D building rendering, vector-based map drawing and offline reliability. The 3D rendering is really amazing and definitely the headliner on this roll-out; but the latter two features are what makes Google Maps 5 a force to be reckoned with for mapping on mobile devices.

Most users are familiar with their Google Maps opening in image tiles. These image tiles take up a lot of memory and as Google adds more information and depth to maps, they continue to get bigger. But with Vector drawing Google is effectively drawing the lines on the map in real time and on demand using numeric coordinates. To put this in perspective, Google says that vector drawn maps will require 70% less data than tile image-based maps. This has distinct benefits in that your maps will load faster, zoom in and out easier and you can store much larger sections of the map in the memory.

If that wasn’t enough they’ve added offline reliability! Being able to cache so much more of the map means you have way more offline usability. Even without a network connection it will still reroute you if you make a wrong turn.

Just be aware that you must have Android 2.0 or higher to use any of these new features, and to be able to tilt and pan around the new 3D building your handset will need multitouch; but for features like these that’s really not too much to ask for now is it.  Here’s a full list:

The following devices support panning, zooming, and tilting gestures only.