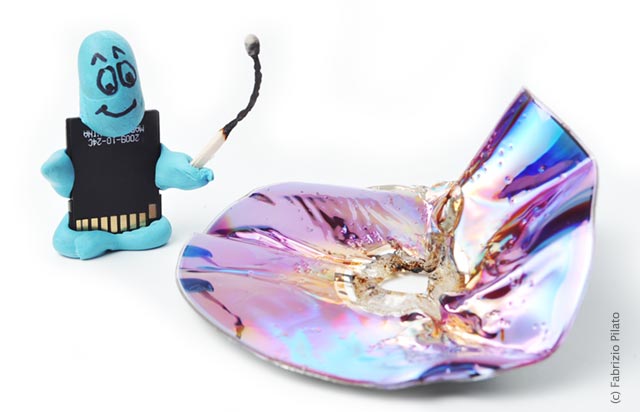 It’s used in devices ranging from laptop computers, home theatres, to in-car entertainment systems, but the DVD was designed before the time of ultimate mobility, and that lack of portability along with it’s fragile nature is simply going to kill it.

As the age of smartphones and tablets continue to advance in capabilities — the iPad will take 12% of the PC market in 2011 — streaming data to these smart devices has become a staple of how they are used. Other formats like SD and USB have never really taken off for delivering content, but their chance is coming, and when it does the DVD will be dead.

The recent Chapter 11 bankruptcy protection filing of Blockbuster video in September was a great indicator of the DVDs demise. And now, with Netflix ramping up their streaming content services, things are going to start skipping to put it mildly.  Netflix originated with DVD rentals by mail, but inevitably the shift in streaming came as devices and consumers demanded it. They made the video rental store simply a click away, but waiting for a DVD in the mail could take days. Internet users were ready for more, so Netflix turned to streaming by raising their mail subscription rates and lowering the streaming service ones.

At no other time have we had access to such high-speed Internet connections that we could receive the same content (that would once come on a disc) through the Internet in just minutes. Not to mention the hardware in devices gaining the ability to play  high-definition video. The video store of old is gone and a new face has emerged. But can the Internet keep up with a world filled with HD streaming media? Not at this rate.

“Video disc rentals will continue their significant decline,” Keith Nissen, principal analyst for In-Stat said in a statement. “The convenience and utility of the online offerings are simply too compelling.”

Real-time entertainment and streaming appears to be the growing trend for media distribution, we are watching it, analysts have said it, and our devices are doing it. It’s instantly accessible, looks pretty damn good, and we don’t have to worry about returning anything on time; or at all. At a growth rate of 270% over the next five years, and a current peak of 20% U.S. bandwith use by Netflix alone — 43% total peak peak traffic in the U.S. according to Sandvine — real-time entertainment streaming could bring our Internet connections down to their knees. Operators will have to spend millions in order to keep up with such demand. It is easier for companies like Comcast and Rogers to do so, where “the last mile” is usually a 10Mbit connection or better hooked up to a fiber trunk down the block. But wireless devices on Verizon, AT&T, and the likes of many other mobile operators all wanting to stream content to their subscribers at the same time? It’s not going to look pretty.

To address this concern they are ramping up fictional 4G networks to buy themselves time.  It will be like BP’s first attempt at patching the rig, it may work for a short time, but the sheer power of the flow will burst their pipes. Carriers have multiple issues facing them now, technically, RF and Internet bandwidth limits, back-haul limits, not to mention the financial burden of a zero or negative return on their investment to bring networks up to par with the increased demand; their going to have to do much much more to keep up.  We’ve seen bandwidth limitations and locks put on devices by carriers to restrict data usage countless times.  Data plans are costly, mainly to deter exorbitant usage, but these are all quick patches awaiting the inevitable.

The time for change

Movie studios tend to know when things need to change, and before that time has come they’ve already had their hands in a half dozen other models just to be safe. The SD, or flash memory, is one of those delivery models. There’s never been a DVD-ROM included within a tablet or smartphone, and probably never will be. Most netbooks and sub-notebook computers like the MacBook Air have already done away with them too, so it’s obvious to tell the DVD is on the same crash course mission our good old friend the floppy disc took.  Now, with flash memory slots becoming integrated in nearly every device, and Apple’s iPad 2 rumored to have an SD card slot as well, the SD maybe the next format for the masses. 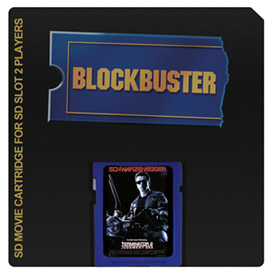 The one problem the SD faces is that it is small and can easily be lost.  If this were to fly it would have to come with an expansion bay or cartridge where a larger “cassette” type of contraption is used to insert the SD into, then into a player.  Sony did it with the mini-disc, they shrunk a disc, threw it in a cartridge and made a new format.  It can be done with SD too.  There’s no need to create a new proprietary format, just create a cartridge for the SD, put some fancy movie labels on it, which can also double as a protective case and call it a day.

A California company called Mo-DV (Mobile Digital Video) is half-way there.  They have developed a patented product to deliver content via flash memory devices. Mo-DV’s solution is for studios to distribute and protect their content before letting it out to the world. DRM is important, but obviously useless when looking at todays DVDs encryption strength. The Mo-DV solution comes in multiple fronts, first, they’ve embedded their own OS on a micro-controller that is custom designed to their SD cards. This micro-controller provides the encryption and playback capabilities needed for a device to play the encoded film. You could easily copy the files from your the SD card to a harddrive and think you’ve become a pirate, but it wouldn’t play without the proprietary microcontroller being present. It works so well because regular SD cards cannot issue low level controller commands, neither can a DVD, the Mo-DV SD can and it won’t need new hardware to do it.

The Mo-DV Multimedia Player allows a studio to dump a feature-length film in the highest quality possible to a Mo-DV flash memory SD card/USB stick. “The SD card will play in every device out there now, and 4 billion potential devices by the year 2014” Jessica H. Fullmer, Founder and CEO of Mo-DV told Mobile Magazine in a telephone interview.

With a GUI on board for media playback, anyone using a Windows Mobile, Symbian, Palm, Linux (Android and Maemo) device, including Windows and eventually Mac OSX can watch a flic at the highest resolution that their device supports instantly because of the embedded software.

“There is increasing demand for movies on USB Flash Drives and SD cards rather than on DVDs, as these newer formats are more portable, offer a wide variety of options at a reasonable price point, and  they can be used on numerous mobile platforms as well as on PCs.  Furthermore, movies on Flash memory devices are a more suitable option than downloading content over the Internet, as today’s viewers aren’t willing to deal with downloading delays, picture flickers, fade out and lost signals.  As such, we are looking forward to targeting our technology to more SmartPhone operating systems in the months to come.” said Fuller in a press announcement earlier this month.

Internet service providers and wireless carriers won’t flinch with Mo-DV, Blockbuster can re-open their doors and have boxes of SD cards on the shelves instead of DVDs, movie kiosks at grocery stores will increase their capacity to carry thousands of titles, and it could be all thanks to technology made by Mo-DV and a tiny little chip called the SD.  Best of all, we need not worry about scratching a disc again.