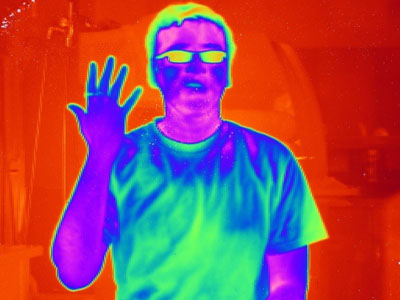 When I heard about the Northwest University’s revolutionary new high-resolution infrared camera technology, the first thing that popped into my mind was that Predator movie with the Governator; how clever that whole mud thing at the end was.

I quickly brushed that thought aside. Besides, it probably wouldn’t work anymore given that the new Type-II InAs/GaSb superlattice-based cameras can detect a difference of as little as 0.02°C.

Though my next idea may not have been any more rational, it’s gotten me enthused in ways California politics just can’t.

I remember an old video I watched about Honda’s “Intelligent night vision system,” which used dual far-infrared cameras on the front bumper in combination with a shape-recognition system to detect and warn the driver of obscured pedestrians. When the night vision was switched on, a small screen raised up on the dash, marking pedestrians who stepped out in front of the car with a red box.

And though the idea of night vision in automobiles has caught on with a few companies, this could mean a big upgrade.

“Not only does it prove Type-II superlattices as a viable alternative to MCT, but also it widens the field of applications for infrared cameras,” wrote Walter P. Murphy professor Manijeh Razeghi in a press release. The thermal imaging capabilities of existing long wavelength infrared radiation (LWIR) cameras, which are based on mercury cadmium telluride (MCT) materials, the release continues, are used in everything from electrical inspections to security and nighttime surveillance.

The Type-II superlattice is mercury-free, more robust, and can be deposited with better uniformity. This will significantly increase yield and reduce camera cost once the technology goes commercial. What’s more, the new cameras provide a 16-fold increase in image resolution and can provide infrared images in the dark.

If these new cameras were to be incorporated into intelligent night vision systems such as Honda’s, the improved thermal imaging could be the beginning of the end of pedestrian- and deer-related collisions. Since they no longer contain mercury, the environmental impacts drop severely in the case of a collision.

There is one downside to this idea: Between the hands-free cell phone systems, SRS radios, GPS displays and a myriad of other distractions, wouldn’t it be dangerous to throw in another screen for thermal/night vision?

The solution: Remember Samsung’s see-through laptop screen? Transparent OLED. Flick on the thermal night vision switch while you’re driving on a dark highway in moose country or in the shady end of the metropolis during a power outage and the red box will pop up right on the windshield.

At least it’s a thought.