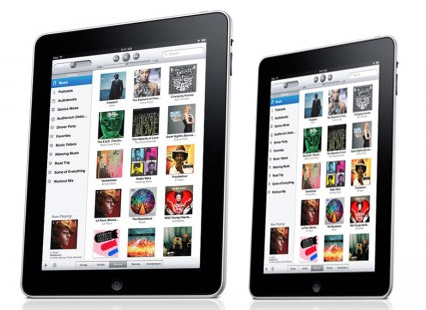 Rumors are heating up around the Apple’s spring release of the iPad 2, including the possibility of a February launch.

But what’s really bizarre is the apparently-verified addition of a smaller 7-inch iPad.

According to Reuters news, interviews with supply chain sources have confirmed exactly what Steve Jobs himself has ruled out: an iPad of about half the size of the first generation and closer to the Samsung Galaxy S.

Then again, Jobs did also slam the idea of video playing iPods, and look at them now.

Other sources have confirmed retina display, face-time cameras on the front and rear, SD card slots and a slimmer body than the full-sized model.

And though some suppliers – such as Foxconn in an interview with Spanish newspaper El Mundo – say they’ve been asked to bump up production and shell out enough parts for the machines to be ready “within the next 100 days,” analysts still speculate an April launch of the products.

So what does this all mean in the long run?

It might just be the wrong time to put Apple’s mystical super-tablet under the tree – be it for a loved one or as a “Secret Santa” gift to yourself. Especially if you’ve been pining for a smaller, more conveniently-portable iPad to hit the shelves; with cameras too.