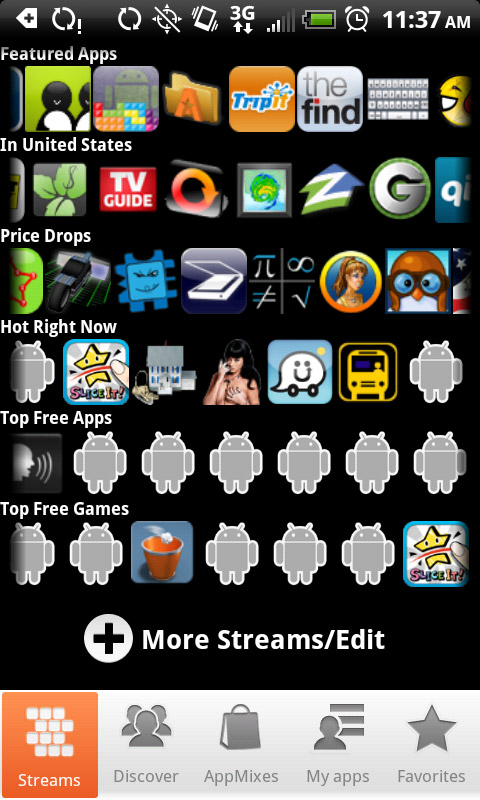 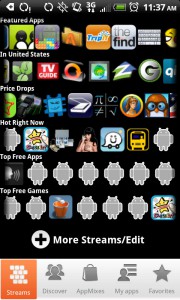 Browsing through Android Market seems straightforward enough, but it’s easy to miss a gem of an app among that ever-growing list of options. Offering an alternative way to casually browse for some new applications on your Android phone or tablet is Appsfire, which is an app itself.

Instead of the standard Android Market interface, you are offered a series of constantly shifting conveyor belts. The endless supply of app icons will scroll across your screen, organized into several categories like Price Drops, Top Free Apps, Top Free Games, and Hot Right Now. The good news is that because it keeps shifting, something might catch your eye that you might otherwise miss in the regular Android Market interface.

The bad news is that not only are the icons fairly crowded on your screen, but you are afforded no information about any of the apps as they pass you by. Unless you already recognize what a graphic means, as would be the case with the Twitter and Angry Birds apps in the screenshot shown here, you probably don’t know what an app does and whether you’d want it. Take the boxy smiley face as the first Price Drop option, for example. What is that?

One interesting feature, though, is to keep a watch on several apps and have them show up in the Price Drop category when the price is, in fact, reduced. You can also do bulk installs and uninstalls at will. Appsfire has been available on iTunes for a while now for the iPhone — the iPad version is called appstream— while Android just hit version 2.0.