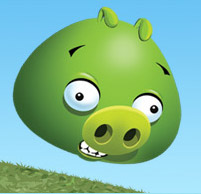 One of the issues that some people encounter when using Android Market is that they have to use a credit card to buy apps. There’s also a lack of in-app mobile payment solutions, which can take away certain opportunities from the developers to make some extra cash. Rovio, the same folks that brought us Angry Birds, are addressing these concerns with their creation of the Bad Piggy Bank.

This comes straight from Rovio CEO Peter Vesterbacka during a streamed press conference. He says that Rovio has created Bad Piggy Bank and it’s an in-app payment solution for Android-based devices. You don’t need to go through Google Checkout. Instead, the solution is designed to allow users to purchase application upgrades, unlock ad-free versions of apps, and so on.

The idea behind Bad Piggy Bank, then, is similar to the all the downloadable content that you’d find through Xbox Live or PlayStation Network. In the context of Angry Birds, Rovio might offer several additional stages at a nominal fee, for example. While you are in Angry Birds, you can opt to buy these extra stages and you don’t need to go through Google to do it. Further still, you don’t need a credit card either.

Apparently, Bad Piggy Bank will integrate with local wireless providers, allowing the in-app purchases to appear on your monthly cell phone bill instead. This adds a level of convenience, to be sure, and could make the impulse buy all that more impulsive. It is too bad that Google didn’t do this themselves, but it does show that Rovio has more up its sleeve that hurling feathered friends into makeshift pig-designed structures.