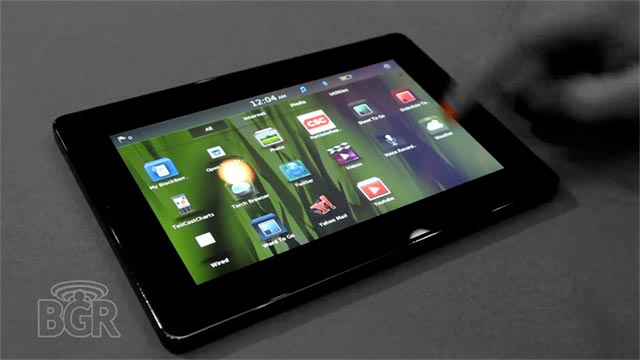 Are you on the verge of buying an Apple iPad or Samsung Galaxy Tab, but you’re intrigued by the possibilities of the upcoming RIM PlayBook? Let’s add to that intrigue, because here is a complete hands-on walkthrough video of the BlackBerry PlayBook tablet.

The demo runs through quite a few of the tablet’s main features, including the QNX-sourced operating system of course. Everything looks to be running very silky smooth and it has derived some menu inspirations from both Android and iOS.

The multitasking is particularly impressive with large “thumbnail” images shown in a CoverFlow-like manner. In the demo, he has the music player, photo app, and video player all running at the same time. Like Windows 7, the “thumbnail” of the video player is actually showing the video. That’s neat, but surely a battery drain.

They also run through some other nifty things like closing open apps in the multitasking manager (swipe it up), the built-in camera app, and so on. Interestingly, there’s no demo of Flash support, which is supposed to be a big selling point over the iPad.

Overall, it looks pretty darn cool, though I find that the bezel is a little too “fat” around the color display. What do you think? Does RIM have an iPad killer on its hands, or just an iPad clone?