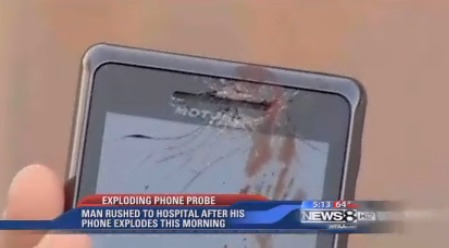 Surprised? That Motorola Droid 2 that allegedly exploded while a man was talking on it could be nothing more than a case of attempted fraud, if an “anonymous Motorola representative” is to be believed. According to GearLog, an unnamed source at Motorola said there was no evidence of an explosion in the Texas mans device, in fact “The only things that could explode in a phone would have resulted in a phone that did not work, yet this phone worked. And there was no explosive damage to the device (things inside blown outward, etc),” said the representitive.

By looking closely at this photo the earpiece damage has impression marks, most likely made by concrete or rocks. Which could mean the man dropped it. What caused the “loud pop” Aron Embry heard is anyones guess, perhaps his eardrum burst, or he whacked his head on the side of the window, who knows. Maybe he punched himself in the face after dropping his phone?

This is of course not an official statement from Motorola, as doing so at this stage would definitely create some legal implications. What we have to consider is that anything is possible, and so is creating an impression of doubt in the minds of everyone, if this is indeed true or not.