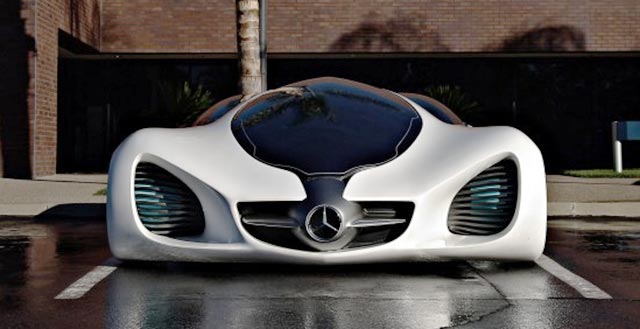 Out of the Los Angeles Auto Show Design Challenge –– which seemed to be based on the premise of having automakers dream up the most irrational 1000 lb. cars possible –– came the Mercedes Benz Biome; easily the most ridiculous concept vehicle in the contest. A car grown in a lab from genetically altered seeds embedded with Mercedes DNA.

According to their press release, the “BIOME symbiosis vehicle” is made from an ultralight material called “BioFibre.” They continue:

“This material is significantly lighter than metal or plastic, yet more robust than steel. BioFibre is grown from proprietary DNA in the Mercedes-Benz nursery, where it collects energy from the sun and stores it in a liquid chemical bond called BioNectar4534. As part of this process, the vehicle is created from two seeds: The interior of the BIOME grows from the DNA in the Mercedes star on the front of the vehicle, while the exterior grows from the star on the rear. To accommodate specific customer requirements, the Mercedes star is genetically engineered in each case, and the vehicle ‘grows’ when the genetic code is combined with the seed capsule. The wheels are grown from four separate seeds.”

Yeah, it’s pretty cool looking. It’s a neat idea. And it could easily be incorporated into the inevitable sequel of Demolition Man, probably parked in front of a Taco Bell.  But between the Biome, the “electric powered rickshaw” and the Toyota seaweed-mobile, what the contest really has me wondering is why car designers are wasting their time thinking up such absurd sci-fi monstrosities rather than pondering tangible solutions to the consumption crisis we’re already facing.

If Mercedes is serious about going eco-friendly, a good first step might be halting the production of their 13 mpg G-class SUVs. But that’s just my opinion.