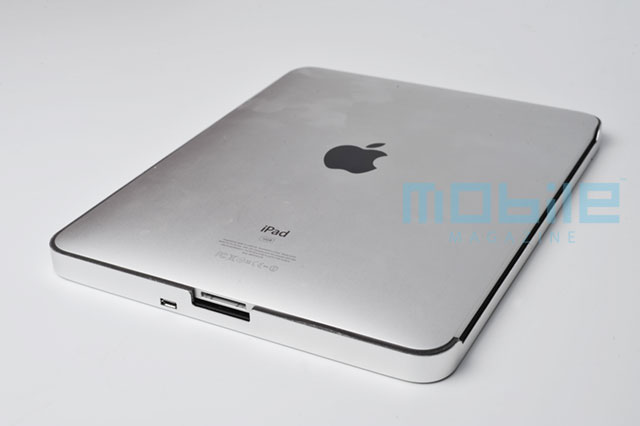 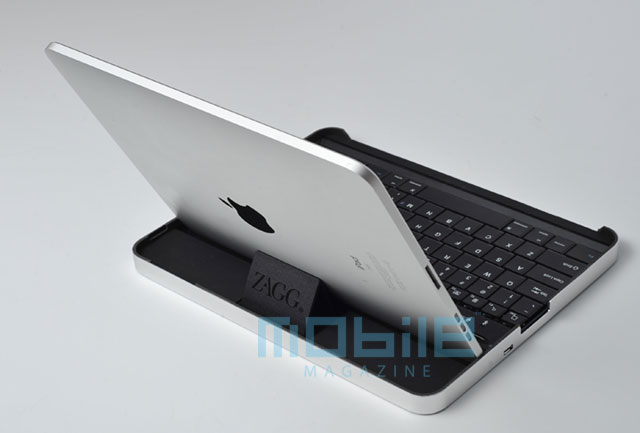 Zagg’s ZAGGmate is a Bluetooth keyboard case that sells for $99 and doubles as protective shell for your Apple iPad – essentially turning your Apple tablet into a 10″ touchscreen netbook.  Sure, you could just go buy a MacBook Air and end up with a real computer, but for those of us intertwined in the evolution of mobile device tabletry, we couldn’t have it any other way.  Besides, how are we going to run Angry Birds and all our iOS apps with Mac OSX?

The Design
Molded out of lightweight aluminum, the 86% sized QWERTY keyboard layout (in comparison to Apple’s wireless keyboard) will give you a slightly cramped feeling at first. But don’t fret, it’s easy to adapt to after a punching out a few lines of text.  The keyboard is recessed slightly within the aluminum shell, making for raised areas that come in to contact with the iPad and your thumbs as they rest near the space bar. And a comfortable resting place it is, made of a soft, smooth, dense rubber compound.  This prevents scratching your iPad’s outer bezel, because that’s all that really comes into contact with the ZAGGmate aside from the inner edges.   These inner edges have a thin strip of high-density foam that hugs the sides of your iPad in place – also providing some sort of impact protection, all the while keeping it “locked” in for mobile transportion.

Zagg has added a bonus row of keyboard shortcuts all along the top.  Starting from left to right are the Home (double tab for multi-tasking, sorta like cmd+tab), Spotlight, Photos, Virtual Keyboard and Turn off Display.  Going further along the top are also a tradtional set of multimedia keys we find on all Apple keyboards.  Command, Option and Function keys are situated in their typical places, giving you instant copy/paste capabilities.  Most of the keys are exactly where you would expect them, thankfully no tricks in re-learning a layout with the ZAGGmate. The up and down arrows threw me off on several occasions,  the left/ right arrows are besides the up/down.  Aside from that, you’ll be hammering out keystrokes faster than anyone iPad users. 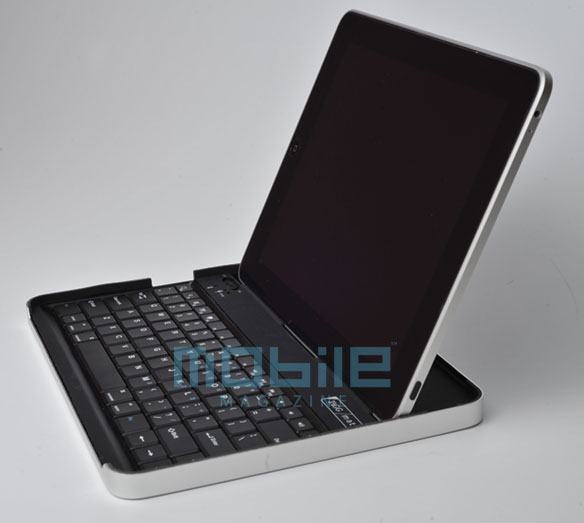 The Good
The iPad virtual keyboard is restrictive in a sense.  Sure, it adds mobility and can be accessed with a touch, but when large amounts of keystrokes are being inputted – especially the ones on Apple’s second menu – on-screen typing is just a virtual bottleneck.  Addressing the need for an alternative to the virtual keyboard, the iPad ZAGGmate does a very good job. We received a production ready model and its keys are smooth and soft to press.

It couldn’t get any easier. The simplicity of its on/off syncing abilities are really painless.   As soon as you have paired the ZAGGmate with your iPad all it takes is the flick of the switch to bring back instant access.  No delay as I would have imagined.

Protection is prime.  When in “case mode” your iPads display is protected with a solid aluminum plate.  The backside is left bare, but that’s just another plate of aluminum, so if you’re not all freaked out about cosmetics, slap a sticker on there and call it a day.

The Bad
It’s not a netbook.  Ok we know that, it’s the iPad.  So having a keyboard on the iPad could make some people mad. They  may kick, scream and yell things at you, like “go buy a netbook” but in the end, you’ll be typing twice as fast as them, if not more. So is it really a bad thing?

The function + delete key did not not work in notes, typically, combination should delete keystrokes in front of your cursor.

No ability to adjust the angle that your iPad is tilted at.  It will be locked in at roughly 68°, although you do get to switch between landscape and portrait modes.

The Verdict
At $99 its a bit pricey, but this is a really well made keyboard accessory for the iPad that will cater to one specific user; someone who is banging out emails, text and other bits of data on their iPad.  If you  feel the bottleneck of the iOS virtual keyboard like a fuzzy itchy wool Christmas sweater your treehugging Aunt Jen just gave you, then the ZAGGmate is for you.  Typing at those speeds you’ll sooner bust out a T9 cellphone and get it done with.

Like I said, although the iPad’s back is exposed when in case mode, the screen is protected, which is the most important part.  Adding a back to this could have been done, but you would be gaining extra bulk and ruling out your ability to just slip it in a nice sleeve.  As the end user, you will have to decide if the extra battery draw on your iPad while using Bluetooth is worth the increased typing speed you’ll gain with an 86% keyboard. Allthough the ZAGGmate has its own internal battery that runs for “months,” having Bluetooth constantly on your iPad to connect to it will significantly decrease your runtime, if that’s even an issue.  I would have been really impressed if Zagg had a beefier battery pack built in that could simultaneously charge the iPad, but that would have raised the price.  If for some reason you just want the case, sans keyboard, Zagg sells that for $30 less.

So, if on that sunny Saturday afternoon on your trip to the golden Apple store you accidentally purchased an iPad instead of a that MacBook Air, or perhaps that Acer netbook you walked past at Best Buy, here’s your chance to get some QWERTY action back.

Sent from my iPad using the Zagg/mate