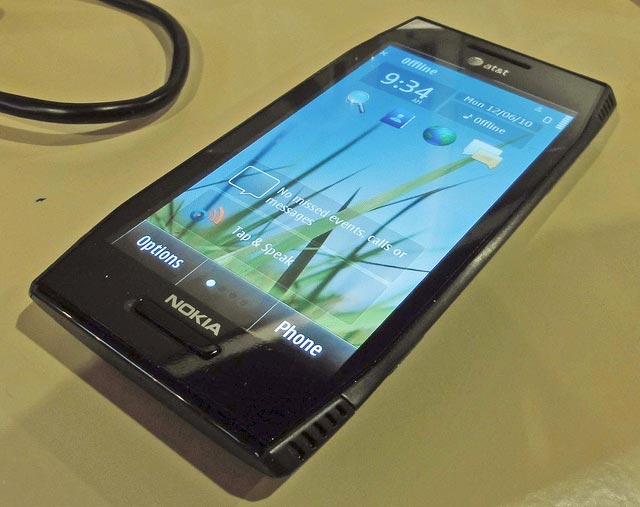 This Eldar guy must have a thing for a certain cell phone maker in Finland, because it seems like he is leaking a new Nokia phone every other day. He reviewed the N8 before it was released, he leaked the Nokia N9 (which may or may not be the same as the E7), and now he’s leaking the X7 with AT&T branding.

Yup, leak-happy Russian technology analyst Eldar Murtazin has yet another unannounced and unofficial look at yet another Nokia smartphone. Now, he’s not the first to leak this phone — we already saw a video of the device — but this is the first time we’ve seen it with carrier-specific branding.

You can quite plainly see the AT&T logo emblazoned near the top of the phone. If that’s the case, then it’s likely that this phone will end up on the shelves at Rogers Wireless in Canada too.

I wouldn’t go so far as to say that the Nokia X7 represents the second (or even third) coming of the N-Gage line, but the X7 is being positioned as a “gaming” phone with its quad speakers and such. How will it fare against the PlayStation Phone? Time will tell, and the longer Nokia holds out from adopting Android, the worse it gets.