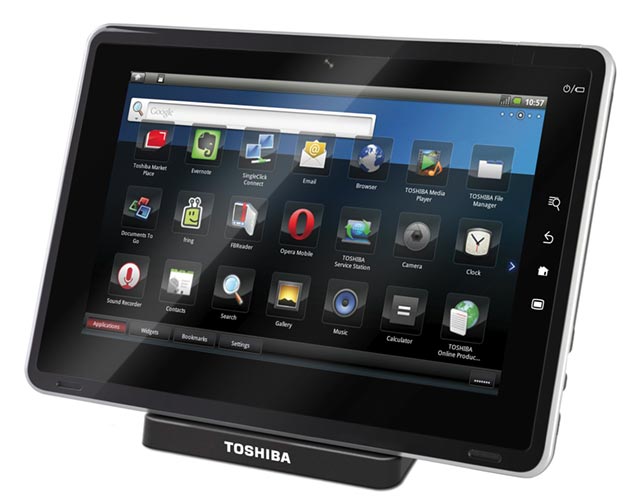 In business, it’s not always a good idea to put all your eggs in one basket. It looks like Toshiba is really looking to hedge its bets when it decides to attack the tablet market early next year, because it has no fewer than three different tablet devices in the works. The kicker? One does Windows, another Android, and a third still with Chrome OS.

The report describes the devices as tablet PCs, but it is much more likely that they are going to be more akin to the iPad or Galaxy Tab kind of tablet rather than the convertible tablet PCs that business users have had for years. The new Toshiba tablet line, which has yet to get an official name, is being handled by the company’s handset department. This would seem to indicate smartphone-like functionality, just like what you’d get on a tablet today. They do mention that the tablets are being positioned “as an extension of PC products” too.

There are going to be two different sizes for the tablets, but it’s unclear what size is getting which operating system and what the internals will be. Toshiba says that two of the tablets will have 10.1-inch panels, while the third goes a touch bigger with 11.6-inches. My guess is that the Windows 7-based tablet gets the bigger screen. Chrome OS and Google Android are just fine on the 10.1-incher and they’re planning a 7-inch variant in the future too.

In any case, Toshiba is saying that the three devices will be on display at CES next month. They’ve outsourced the manufacturing to Quanta Computer, Compal Electronics, and Pegatron Technology (Asus), all of which are Taiwan-based companies.

Photo shown is of the Android 2.2-based Toshiba Folio 100.