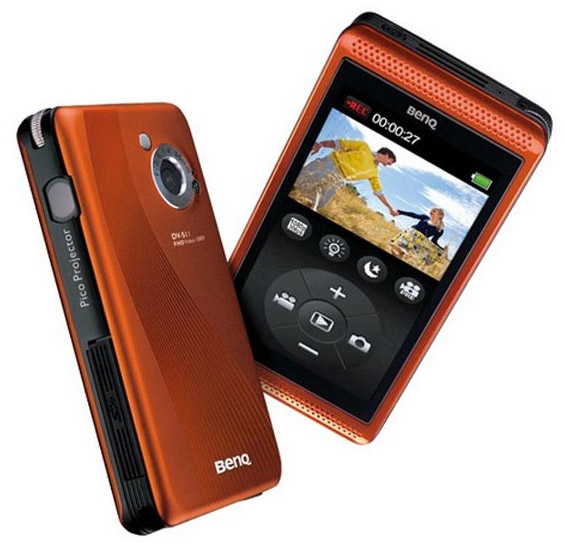 For most intents and purposes, you could probably say that the Flip line of digital camcorders from Cisco is still the dominant force in that particular niche. That’s not to say other companies aren’t trying to carve out their own slice of the video-recording pie, though, and the latest of this bunch is the BenQ DV S11. Its biggest selling point: a pico projector.

There are a lot of these pocket camcorders flooding the market these days and they do fundamentally the same thing. Record reasonable-quality video in the simplest manner possible. The DV S11 is much the same, forgetting about manual settings and offering 10 shooting modes instead. That’s still a lot more than the Flip line and its relative complexity might be a ticket into some geekier hearts.

For example, this BenQ can shoot at 1080p whereas the current Flips still only do 720p. The DV S11 is also able to take still pictures with its 5MP CMOS sensor; the Flip only does video. You can also expand its capacity with SD/SDHC memory cards… and then there’s the pico projector.

I’d imagine that this projector isn’t the most powerful thing in the world, but it could come in handy in a pinch. BenQ claims that it’s capable of creating a 50-inch display. If you prefer, there’s HDMI and AV outputs on there too, but the pico is the darling of the feature set. Look for the DV S11 for about 300 bucks.