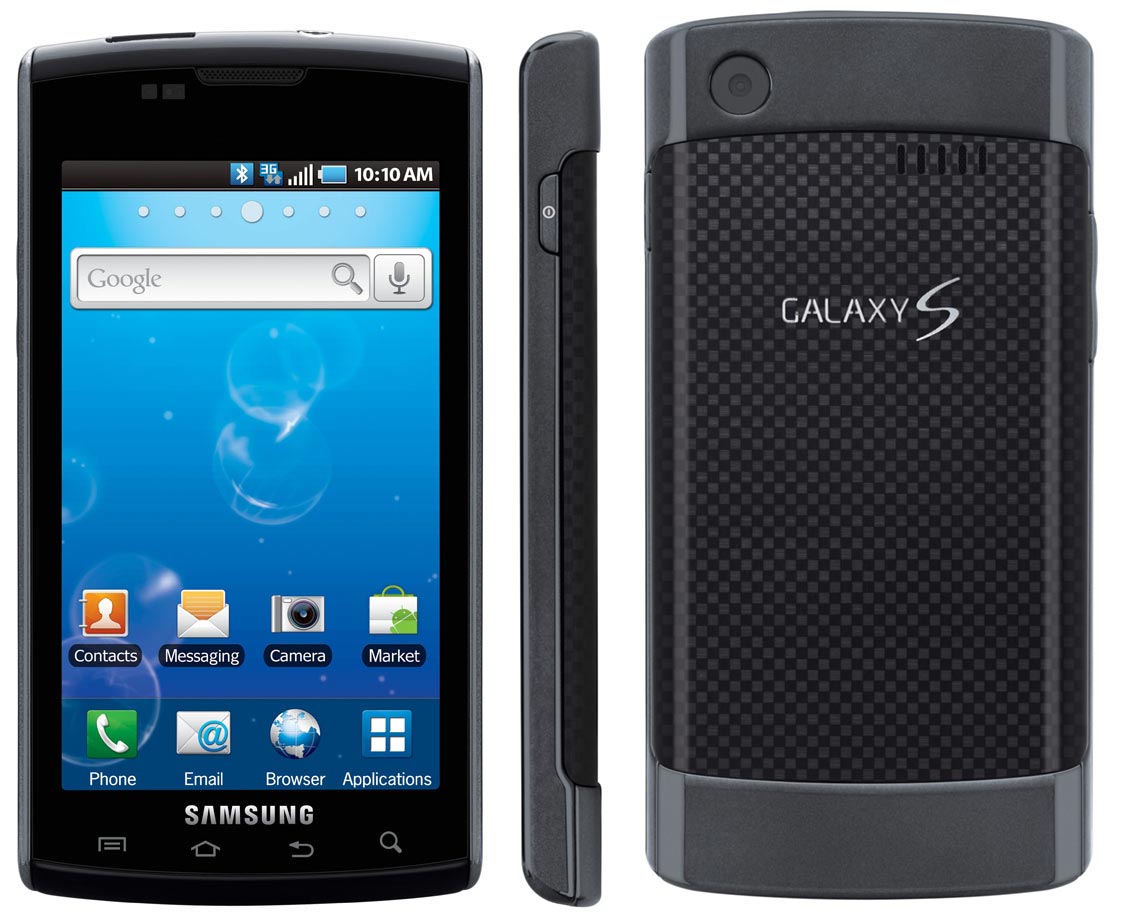 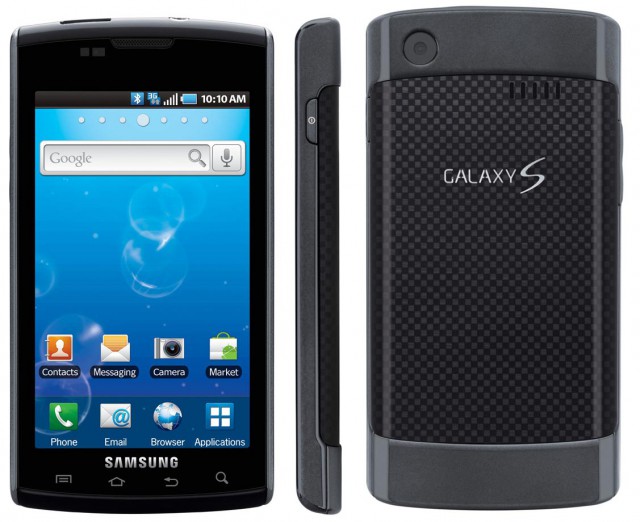 It used to be that HTC was the clear-cut leader in the smartphone arena, but many other companies are competing for the crown these days. HTC isn’t the only Android game in town and Samsung has really carved a nice-sized market share for itself with the Galaxy S line. Even more so as of recent with the introduction of the Google Nexus S. The Samsung Galaxy S is offered as the AT&T Captivate, T-Mobile Vibrant, Verizon Fascinate, Sprint Epic 4G and Rogers Captivate.

I had the opportunity to take this Android smartphone out for a test drive and, by and large, I was quite impressed with what it had to offer and how usable it was as a daily communicator. The Galaxy S Captivate may not be all that different from its other Galaxy S stablemates, but that’s not necessarily a bad thing either.

As a quick rundown, the Captivate has many of the same features that you’ll find on the other Galaxy S devices, like the Fascinate. It doesn’t rock the hardware keyboard of the Epic 4G from Sprint, but this allows it to have a very impressive sub-10mm profile. It also weighs in at a feather light 125 grams, making it feel thinner and lighter than a certain iDevice competitor.

For my part, the most captivating feature on this phone had to be the four-inch Super AMOLED display. The 800×480 WVGA resolution is pretty much par for the course, but the colors really do “pop” off the screen. You’ll get tri-band HSPA (7.2Mbps), quad-band GSM, WiFi, GPS, Android 2.1 preloaded (Froyo update on the way), Bluetooth, and microSD expansion slot.

It Starts with an Amazing Display

If you’ve never had the opportunity to play with a Samsung phone rocking a Super AMOLED display, you’re in for a real treat. It is not at all an exaggeration to say that the contrast is positively brilliant and the colors are incredibly vibrant. Just looking at the regular old home screen on the device is a treat, but it gets even better when you play colorful games like Angry Birds or watch videos through YouTube.

Now, I’m normally the kind of person who prefers a hardware keyboard for its improved accuracy and tactile feedback, but I was able to type quite well using the on-screen QWERTY keyboard on the Captivate. This might be thanks to the slightly larger four-inch display, offering slightly better key separation both in landscape and portrait modes. There’s also Swype in there, should you feel so inclined, but I liked the QWERTY. There is some haptic feedback too (which you can turn off in the options), if that happens to be your kind of thing.

As can be expected with all the Galaxy S devices from Samsung, the Captivate does not rock a “clean” installation of Android. Instead, it features the Samsung TouchWiz 3.0. This is quite an improvement over previous TouchWiz releases, but I wouldn’t say that it is a big selling point beyond regular old Android.

You get a total of seven home screens, each of which can be populated with your choice of shortcuts, scrollable widgets, and other personalizations. There are “live wallpapers” in there too, but you’d probably want to keep those to a minimum if you want to get better battery life out of this phone. Perhaps the biggest difference is how the apps are displayed in the main menu. Rather than having the usual vertical scrolling in Android, you get app “pages” much like the iPhone. I can’t say if this is better or worse; it’s just different.

Some pre-installed apps include the Daily Briefing (with news and weather), Feeds and Updates (for social media integration), Aldiko eBook, Layar, Samsung Apps, Social Hub, ThinkFree Office, Voice Recorder, and Write and Go. This is addition to the usual Google services like Gmail and Navigation. 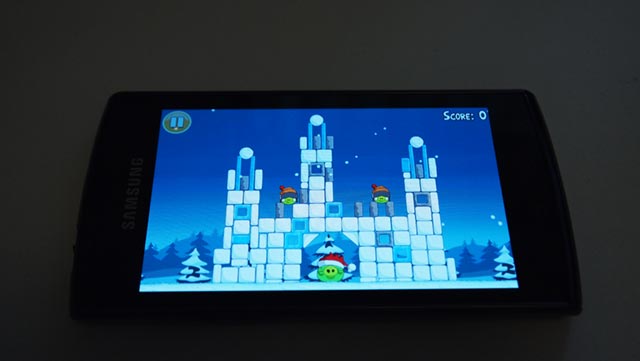 Underneath the four-inch display are four soft keys: menu, home, back, and search. These are pretty standard fare among Android devices, but I found that the touch-sensitive nature led to some quibbles. I’d be in the middle of playing a game or surfing the web in landscape mode when I accidentally touched one of the touch-sensitive buttons, putting me somewhere I didn’t want to be.

This may have been only with the review unit I received, but I found that the phone sometimes thought I pressed the search button (which brings up the quick search box) even when my finger was nowhere near it. I understand that having a flush display and flush soft keys makes for a svelter overall appearance, but it is a source of some frustrations too.

As can be expected with any modern smartphone rocking such a large display, battery life on the Samsung Galaxy S Captivate leaves a little something to be desired. Under moderate usage, I was barely able to get a day out of the phone. If I put on a slightly extended session of mobile gaming, this was shortened even further, linking me up with a wall outlet more often than I would have liked. This really is par for the course when it comes to phones like this, and it’s not as bad as the EVO 4G, but just be aware that you may need an extra battery or easy access to power on the go.

In terms of design, the somewhat larger bezel around the four-inch screen makes for a rather large footprint for the Captivate. It’ll still fit in most pockets, thanks largely to its slim profile, but it is a little bit on the big side. Two features that are quite positive, however, are the USB connector and the battery cover. Instead of a flimsy rubber flap, Samsung used a sliding door to protect the USB connector at the top of the phone. I like that.

Similarly, you remove the carbon fiber-look metal battery cover not by sliding it out, but by sliding the lowermost portion on the back of the phone. This gives the metal plate enough room to slide downward ever so slightly. The “click and lock” nature of that lowermost portion gives some reassurance that you won’t accidentally slide off the battery door unexpectedly.

Now that the Google Nexus S is available, you may have some second thoughts about picking up the marginally older Samsung Galaxy S platform. Don’t be. The Captivate is a seriously solid phone with a beautiful display, plenty of horsepower, and all the Google integration you’ve come to expect.

The build quality feels quite good, the slim profile is a plus, and the little details (like the sliding cover for the USB port) make this a great choice for Android fans. Better still, Rogers has reduced the price on this phone to $100 on contract, making it a good value to boot. Some other folks have voiced their concerns over the GPS and voice input accuracy, but I experienced none of these issues. Unequivocally, the Captivate is one of the best Android phones available through Rogers right now. That might change in the near future, as with so many other types of tech, but for now, the Captivate is a solid buy.