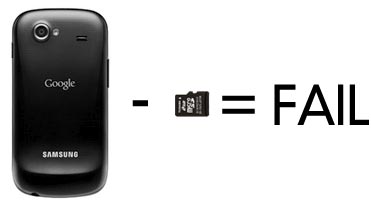 The Google Nexus S smartphone is all official with its Gingerbread-fueled sweetness, but there is at least one element missing from its otherwise intelligent frame: expandable memory. Much like the iPhone, the Google Nexus S lacks in the microSD slot department.

By and large, early reviews of the device have been overwhelmingly positive. People like the contour display. People enjoy the vanilla build of Android loaded on the phone, unfettered with custom UIs and brand-specific skins. The Hummingbird processor sings and the svelte lines make for a nice look too. But it can’t take microSD cards.

Granted that the phone already has 16GB of internal memory, which should be more than enough to handle your various apps and documents, but a microSD expansion slot has become pretty much a standard feature on all Android phones. Not everyone will use them, but the expandable memory can be huge for those who do. What if you want to load up your phone with some music and videos? You’ll run out of space pretty quickly with just 16GB in tow.

For me, it’s not really a deal breaker, but it is a noteworthy blow. Why would they take out the memory card slot when it’s already there in all the Galaxy S phones from Samsung?