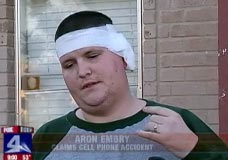 And you thought a cell phone leading to your impotence was the greatest of your concerns. It seems that a man out in the Dallas-Fort Worth area was in the middle of a pleasant conversation when his Motorola DROID 2 allegedly exploded in his ear.

Thankfully, the explosion is relatively minor. It’s not like the phone was packed with C4. Instead, Aaron Embry said that he was speaking on the phone when he heard a “pop.” He says that he didn’t feel any pain at the time, but when he pulled the phone away from his head, he realized that his ear was bleeding. The pop, I guess, was his ear drum bursting.

Instead of heading straight to the hospital, Embry decided to drive over to his wife’s workplace to snap a few photos. They then made their way to the hospital to get him the proper medical attention. If he’s not in any pain, I suppose it wasn’t all that urgent. Maybe he needed the photos for insurance purposes.

In any case, photos of the phone have been released on the Internet and it looks like the screen on the DROID 2 is cracked. I’m wondering if we’re back to the whole exploding battery fiasco from a couple years ago, although the phone continued to work and receive calls afterwards. Motorola is investigating.