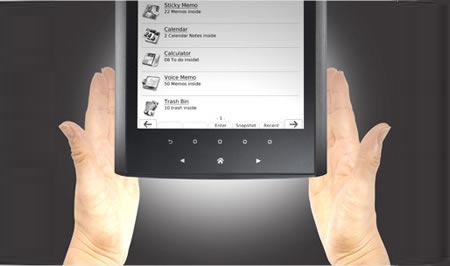 Having a cool tablet like the iPad is one thing. Having an e-book reader like the Kindle is another. And then, there’s this third thing called the Asus Eee Note EA-800. You see, it doesn’t really cater to the full color multimedia fans of the iPad or the simple e-book reading of the Kindle; instead, this tablet focuses on handwriting.

Sexy, right? Well, that all depends on how you intend on using a device like this. The whole point of the Eee Note is that it works like a digital notepad. Asus claims that the EA-800 has “ultra-sensitive handwriting input,” allowing you to take notes at business meetings, in college lectures, and whatever other situations that require taking notes. Looking at some of the promotional shots, it looks like it could be a useful digital sketchpad for designers and artists too.

Some people will say that there is no way this monochrome wonder can compete against the likes of the Galaxy Tab and iPad, but I don’t think that’s what it’s supposed to do. Asus has the Eee Pad for that purpose. With the Eee Note, you get a 2450 dpi 8-inch touchscreen with a matte finish, meant to mimic the look and feel of actual paper… like the Kindle, you could say.

I can’t imagine something like this catching on among the mainstream, but it could prove useful as an alternative to a Wacom tablet for the artists in the crowd.