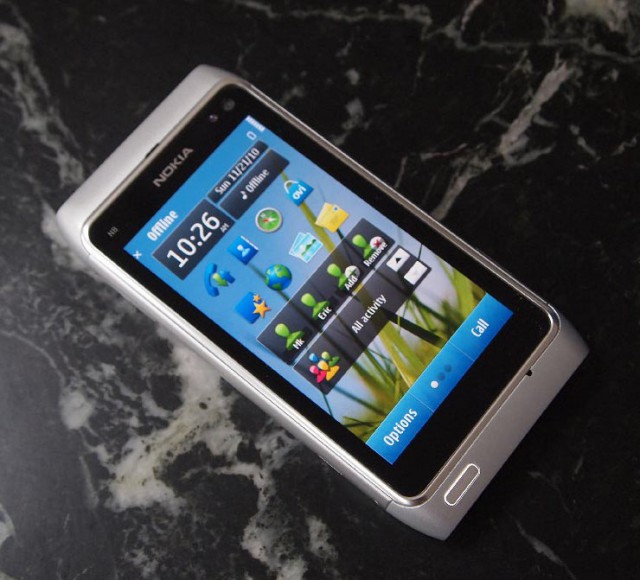 Nokia is still the largest cell phone maker in the world, but it’s quickly losing market share to Android devices, the Apple iPhone, and other suitable alternatives. The company needs to innovate and come up with something new and exciting. Their apparent answer? The Nokia N8.

On paper, this smartphone certainly has a lot going for it. The 3.5-inch multitouch display is an AMOLED, making for some brilliantly vibrant colors. The embedded camera is an impressive 12-megapixels, including 720p HD video recording, autofocus, Carl Zeiss optics, and xenon flash. It’s got HDMI-out, a secondary VGA camera, and five-band HSDPA. That all sounds really good.

The overall design and build quality is quite good too. You get a cool aluminum shell and the construction feels really solid in your hands. The unibody design means that there is no user-replaceable battery, much like the iPhone, but you can tell right away that you are holding a premium device.

Much like other Nokia smartphones these days, it also has a spring-loaded slider switch on the side for locking and unlocking the screen. The SIM and microSD card slots along the left side offer an interesting design too, since the SIM slot is spring-loaded.

A Little Behind the Times

That’s all good stuff, but the Nokia N8 is certainly not without its shortcomings. For starters, it’s still rocking the Symbian^3 operating system. From what I understand, this is pretty much the swan song for the platform as Nokia moves ahead with MeeGo and other options. Compared to the innovations offered by Android and iOS, though, Symbian^3 feels decidedly dated in its approach. It’s close, but not close enough.

Even though this phone only has a 680MHz processor, especially since we’re in an era of 1GHz smartphone, I never really felt like the performance was terribly lacking. Webpages loaded quite quickly and I was able to make good use of the “Social” app for my Facebook and Twitter updates. It’s surprisingly snappy for what it is, but it would have been nice to see a faster processor. Even at the lower clock speed, I was barely able to eek one full day of moderate use on a single charge of the internal battery.

The real star of this phone, however, is the 12-megapixel camera. We’re not just talking about resolution here either, as the picture quality was quite impressive… so long as you don’t use the flash. An outdoor shot on a slightly cloudy day came out pretty great, but an indoor photo with flash ends up looking washed out and almost “hazy” by comparison.

At the end of the day, I can’t say that the Nokia N8 is a bad phone. It’s actually quite good. The AMOLED display is brilliant, the haptic feedback and on-screen keyboard are quite usable, and the 12MP camera is quite impressive (under the right conditions). The OS still needs some work to be friendlier to regular consumers and the web browser isn’t the best, though. I’m also not a fan of how the camera sticks out from the back of the phone. Couldn’t they make it flush?

I don’t think that I can recommend an outright purchase for an unlocked Nokia N8 direct from Nokia (like the sample device used for this review). That said, the version being sold through Rogers is less than $100 on contract. You get a lot of phone for your money, but just know that you’ll feel kind of dated (with the OS) right off the get-go even though it is the first Symbian^3 device to be released. In the US it’s not subsidized by a carrier, so you’re looking at $529 for the N8, but it’s yours outright.