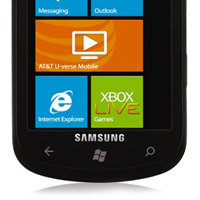 HTC has a long and favorable history with smartphones. It was the clear leader with Windows Mobile, especially as an OEM for other brands. It also led the way with Android. Unfortunately for the Taiwanese firm, that crown has been snatched away, because Samsung is the overwhelming leader in the Windows Phone 7 arena.

Based on a highly unofficial poll of Windows Phone 7 users on WMPoweruser.com, Samsung has a 51% market share in Windows Phone 7, compared to the 37% that HTC is currently holding. Rounding out the top four are LG (9%) and Dell (3%). We’ll have to wait for some more official numbers, but this is really quite enlightening.

Samsung has been aggressively going after the smartphone market all year. It’s already knocked HTC out of 4th spot in worldwide smartphone sales (in Q3 2010, anyway), thanks largely to its increasingly popular Galaxy S line of Android smartphones. Windows Phone 7 just put another feather in the Korean electronics-maker’s cap.

Is HTC slowly going the way of Nokia? A little too pleased with its market share, only to see other manufacturers rise up and snatch away its customers?