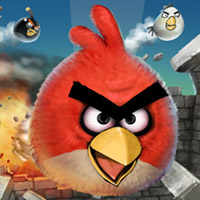 Those antagonized feathered defenders could be heading into yet another battlefield. Angry Birds made its initial splash on the iPhone, but it has since expanded onto other platforms. The next frontier, it seeems, is Windows Phone 7. Those egg-stealing swine are running out of places to hide.

This hasn’t been confirmed just yet, but a tweet from Angry Birds developer Rovio Mobile suggests that the popular touchscreen mobile game will be coming to Microsoft’s new smartphone OS in the very new future. Interestingly enough, there’s an Angry Birds Day coming up on December 11 and that could serve as the right place to make such an announcement.

Rovio and Microsoft haven’t exactly had the best of relationships. There was a whole kurfuffle when Microsoft put the Angry Birds image on its site without Rovio’s permission. There was a whole back and forth for a while, but it seems that they have settled their differences for their mutual benefit.

Let’s just hope that Angry Birds on WP7 doesn’t wind up like the failed peace treaty. Say what?