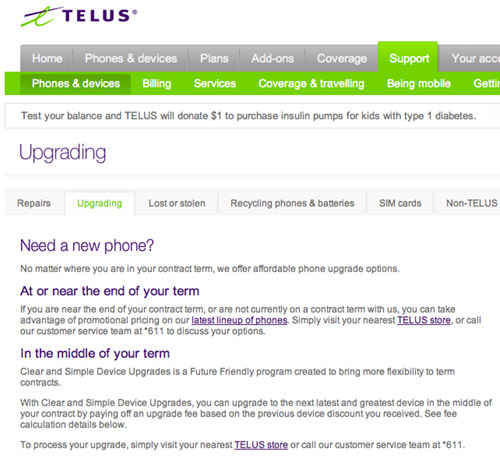 Unlike our American counterparts with their typical two-year contracts, us Canadians usually get stuck with a longer three-year service agreement if we want the full hardware subsidy on a new cell phone. That’s a long time to wait between handsets, so Telus is making it easier for you to upgrade mid-contract with EDUF.

The Early Device Upgrade Fee effectively lets you buy a new phone, whether it be of the dumbphone or smartphone variety, at any point during your contractual agreement with Telus. If your term is running out, you can usually get the full subsidy on a new contract, but EDUF lets you get a new (subsidized) phone when you’re some time away from renewal.

For example, let’s say you want a new BlackBerry Bold and you’ve got 10 months left on your contract. Pony up the $100 (10 months x $10/month), sign a new contract, and you can have the Bold at the current 36-month subsidized price. That’s not terrible, actually, but bear in mind that you can’t do the EDUF thing within the first six months of your contract.