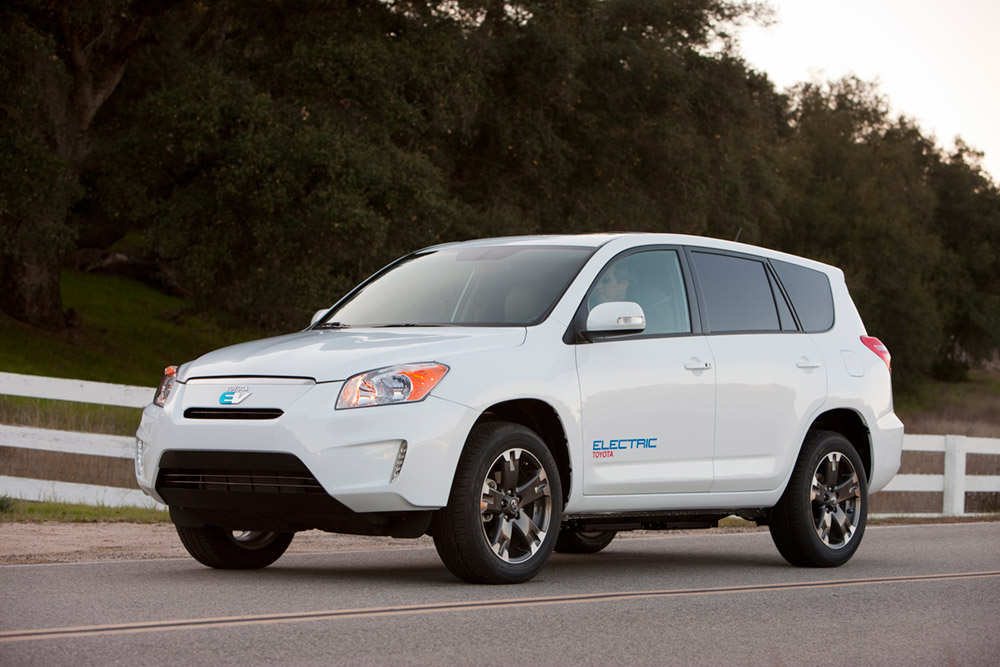 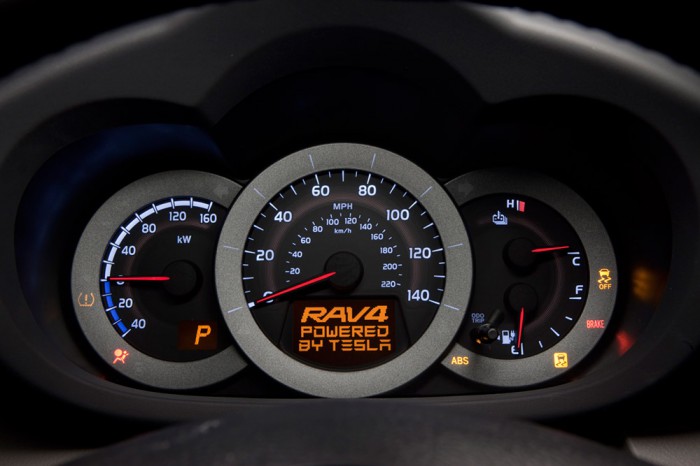 Looks like the Honda Fit EV isn’t the only car doing the full electric debut at the LA Auto Show. Toyota has an electric trick up its sleeve too and it’s the oft-rumored Toyota RAV4 EV.

This comes via a partnership with Tesla Motors (you know, of Tesla Roadster fame), so you know that the electric motor components are going to be pretty top notch. Interestingly enough, despite being significantly larger than the Honda Fit, the pre-production RAV4 EV gets the same 100 mile range on a single charge.

I wouldn’t go so far as to say the the RAV4 is a big SUV, but it’s a heck of a lot bigger than most of the other full electrics we’re seeing on the car show circuit. Put this next to a Fit or Nissan Leaf and there is no comparison, at least in terms of physical size. 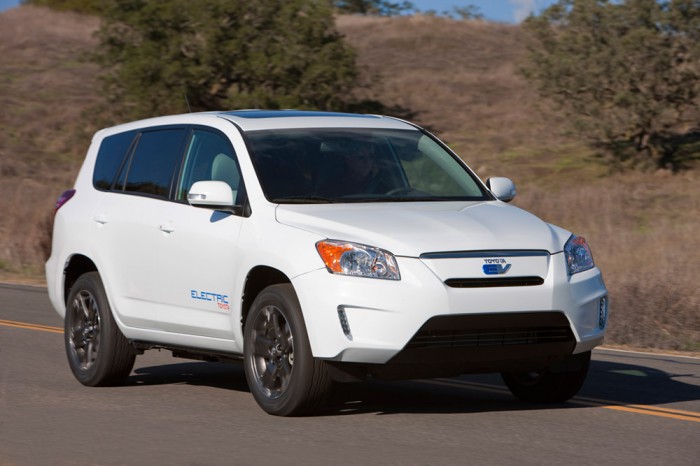 So, what does Tesla have to gain from this partnership with Toyota? Aside from a cash infusion, Elon Musk says Tesla gets “a sense for the Toyota production system… that helps us with the Model S. Having access to Lexus components in the supply chain is also helpful.” Does this mean that the Model S is going to end up with an interior akin to a Lexus IS (or something similar)?

LOS ANGELES, November 17, 2010 — Toyota Motor Sales (TMS), U.S.A., Inc. (TMS) debuted today the second-generation Toyota RAV4 EV at a news conference at the Los Angeles Auto Show. A total of 35 vehicles will be built for a demonstration and evaluation program through 2011, aiming at market arrival of a fully-engineered vehicle in 2012. The fully-engineered vehicle will have a target range of 100 miles in actual road driving patterns, in a wide range of climates and conditions.

“When we decided to work together on the RAV4 EV, President Akio Toyoda wanted to adopt a new development model that incorporated Tesla’s streamlined, quick-action approach,” said Jim Lentz, president and chief operating officer, TMS. “The result was a hybrid – a new decision and approval process and a development style that our engineers refer to as “fast and flexible.”

Led by the Toyota Motor Engineering and Manufacturing North America (TEMA) Technical Center in Michigan, the new development model helped reduce development time without compromising product quality. The team has accomplished this by approaching the project as they would a typical mid-cycle “major-minor” product change. Specifically, midway through a generation, the team began with a fully engineered current-generation RAV4, to which was added a major powertrain option, along with minor feature and cosmetic changes.

Tesla was responsible for building and supplying the battery, as well as other related parts, that met specific Toyota engineering specifications in performance, quality and durability. Toyota was responsible for development and manufacturing leadership and the seamless integration of the powertrain.

“From the beginning, the customer experience has been the focus,” said Lentz. “In other words, how do we deliver an unconventional product to mainstream customers that is compelling and affordable and that offers an acceptable level of daily convenience.”

A large part of the team’s focus on the customer experience targeted driveability. In this case, the end goal is a vehicle with driveability characteristics as close to the conventional RAV4 as possible.

For example, the demonstration vehicle weighs approximately 220 pounds more than the current RAV4 V6 yet it will accelerate from zero to sixty nearly as quickly.

The demonstration vehicle Toyota is currently testing is powered by a lithium metal oxide battery with useable output rated in the mid-30 kwh range. However, many decisions regarding both the product, as well as the business model, have not been finalized. Battery size and final output ratings, as well as pricing and volume projections of the vehicle Toyota plans to bring to market in 2012, have not been decided.

As for a final assembly location, Toyota is considering many options and combinations. The basic vehicle will continue to be built at its Canadian production facility in Woodstock, Ontario. Tesla will build the battery and related parts and components at its new facility in Palo Alto, Calif. The method and installation location of the Tesla components into the vehicle is being discussed.

The RAV4 EV received several distinct exterior styling changes including a new front bumper, grille, fog lamps and head lamps. New EV badging and the custom “mutually exclusive” paint color, completed the transformation. The interior received custom seat trim, multimedia dash displays, push-button shifter and dashboard meters. The RAV4 platform brings a 73-cubic-foot cargo area with rear seats folded down – no cargo space was lost in the conversion to an electric powertrain.
In 1997, Toyota brought to market the first-generation RAV4 EV in response to the California zero emission vehicle (ZEV) mandate and was the first manufacturer to meet the mandate’s Memo of Agreement on volume sales. Powered by a nickel-metal hydride battery pack, the vehicle had a range of between 80-110 miles on a single charge. From model year 1998 to model year 2003, only 1,484 vehicles were sold or leased in the U.S. 746 first-generation RAV4 EVs are still on the road (www.toyotarav4ev.com).

“Price and convenience proved to be critical success factors and they remain so today,” said Lentz. “But much has changed in the last few years. Most importantly, the growing level of awareness that sustainable mobility will come at a cost that must be shared by the automakers, government and the consumer.”

Toyota’s approach to sustainable mobility focuses on the world’s future reliance on mobility systems tailored to specific regions or markets, rather than individual models or technologies. It acknowledges that no one technology will be the “winner” and that a mobility system in Los Angeles will probably look very different from one in Dallas or New York or London or Shanghai.
Toyota’s comprehensive technology strategy is a portfolio approach that includes a long-term commitment to hydrogen fuel cells, plug-in hybrids and battery electrics all driven by the further proliferation of conventional gas-electric hybrids, like Prius as its core technology.

Toyota has announced that coinciding with the arrival of the RAV4 EV in 2012 it will launch, in key global markets, the Prius PHV (plug-in hybrid) and a small EV commuter vehicle. It will also launch, in key global markets, its first commercialized hydrogen fuel cell vehicle in calendar year 2015, or sooner. Finally, by the end of 2012, Toyota will add seven all new (not next-generation) hybrid models to its portfolio.