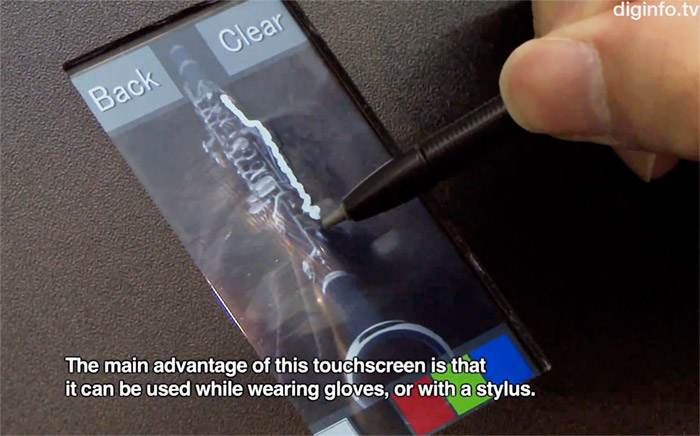 Does the thought of removing your gloves to answer a call or send an important message from your touchscreen smartphone in the dead cold winter make you shiver? Perhaps you’ve opted for a stylus and are getting tired of its lack of accuracy?

However, until recently, the perfect touchscreen that would accept input from a gloved finger as well as a stylus, and be responsive as today’s capacitive screens was a white whale of the cell phone industry, a thing to be dealt with in the future! The capacitive touchscreens currently lack the compatibility with using an input device other than finger.

Hitachi has brought that future in the present, though.  At this year’s IFD International conference, Hitachi displayed to the world that it has overcome the problem on their new capacitive touchscreen display by adding a controller chip that detects input from non-conducting items and turns it into capacitance. The end result: an all-purpose display that receives input from any object, which is destined to be popular with phone and tablet manufacturers.

With the versatile touchscreen that accepts input from any device, Hitachi is the first company to have made such a huge breakthrough in the mobile world, which could address the U. S. and European markets; as well as the Asian markets, where handwriting recognition and stylus input are required by many.

Hitachi unfortunately won’t be marketing the device until the end of 2011, so until then, grab your conductive finger-tip gloves from Fivepoint.