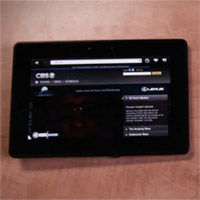 Apple has had its share of competitors since times immemorial – Microsoft, Adobe, Google – you name them. And if present trends are anything to go by, you may as well add RIM (yes, the ones behind the Blackberry) to the list.

Well, apparently RIM recently posted a video comparing their upcoming Playbook tablet’s mobile browser to that of the iPad. So? No harm done in publicizing your product, right? Right, the only catch is that the said video, apart from favoring RIM’s tablet, also did its bit to highlight iPad browser’s weak point (no Flash support, slow page loading speed, lack of pixel to pixel rendering fidelity, lack of high end Javascript and HTML5 – there are too many of them, by the way).

Perhaps RIM just wants to show the world that their tablet’s browser, apart from supporting cutting edge stuff like HTML5, also provides the added bonus of Flash support, unlike that of the iPad. Jim Balsillie, CEO of RIM, also openly stated the same, “You don’t need an app for the web,” (touching upon the fact that most iOS apps are mere frontend implementations of web services).

Even though this isn’t the first time Balsillie has attacked Apple or Steve Jobs, one wonders the motive behind it anyway! This is because RIM devices such as the Blackberry smartphones are taking a beating not from the iPad or iPhone, but rather from Android powered machines. Guess there’s too many of Android devices to attack, so RIM just chose the stationary object (Apple) to hit at.

Plus, talking about giants such as Apple gives you free publicity, no matter who you are. And to further delve deeper, RIM has sensed the fact that the iPad, though initially eyeing the youngsters, has managed to make an impact among the business users (read: RIM stronghold). Obviously, RIM has to counter-attack, and it will not be shocking if the present video is followed by other similar ones.