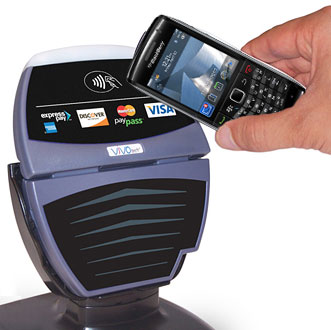 This Balsillie guy has no problem opening his mouth. First, he tried to buy the Phoenix Coyotes NHL franchise. Then, he happened to mention that the upcoming PlayBook tablet would have a module cavity for future upgrades. The latest bomb? NFC tech is definitely on the way to a BlackBerry device.

Near field communications technology isn’t exactly new, but it’s catching all sorts of traction in the mobile phone arena. When asked about NFC, Balsillie boldly said that the company would “be fools” not to include NFC in a future BlackBerry smartphone. Research in Motion is also actively involved in an NFC project alongside AT&T, T-Mobile, and Verizon.

Does this mean that you’ll soon be paying for your morning java by simply placing your BlackBerry on a wireless reader? You might have part with your push email for just that second, but it means that you don’t have to put your ‘Berry aside to reach for your wallet either. It could be good for ID passes in restricted corporate areas too.

Nokia’s 2011 smartphones will all have NFC. Google too will support NFC in Android 2.3, and Apple is more than likely making an NFC-equipped iPhone 5.