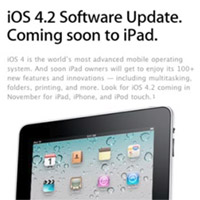 One thing that all of us do quite frequently (though some do it less frequently than others) is printing – documents, photos and what not! Apple users are perhaps expecting a treat coming their way as far as printing is concerned, and if rumors are anything to go by, the next software update for iOS will feature wireless printing, for not just iPad but even iPhone and iPod Touch. But as the old story goes, rumors aren’t to be trusted fully.

Remember Steve Jobs’ intro to iOS 4.2? Among many other things, a feature called AirPrint was announced, which was expected to enable the device to print without the need for any additional drivers. But at the end of the day, AirPrint was just another shared printing mechanism that would help you utilize printers shared via a network or at best HP printers with AirPrint compatibility.

Apparently Apple’s shared printing, even before gaining maturity, has reached its last legs. Judging by what Mac App programmers have to say, and considering the fact that the latest Apple’s developer support documentation makes no reference to AirPrint, it may very well be possible that Apple has decided to pull the plug off shared printing over the network. Even the latest Mac OS update (10.6.5) also reportedly offers no support for shared printing via AirPrint.

So as the scenario stands at present, it seems AirPrint will be in business only through the erstwhile released and still-in-market HP printers which offer native support for AirPrint. Obviously, this isn’t going to benefit the wide array of Apple users worldwide. As a result, such developments have sparked discussions and speculations over the success (or failure) of printing under the iOS. This could pose a serious issue for companies like Lecere (LCRE) who are waiting on wireless printing capabilities for the iPad for POS.

The update for iOS 4.2 has already been released for the developers and it is now only a matter of time before it reaches the end users and the demise/revival of printing using Apple devices is finalized. Until then, it is merely speculation!