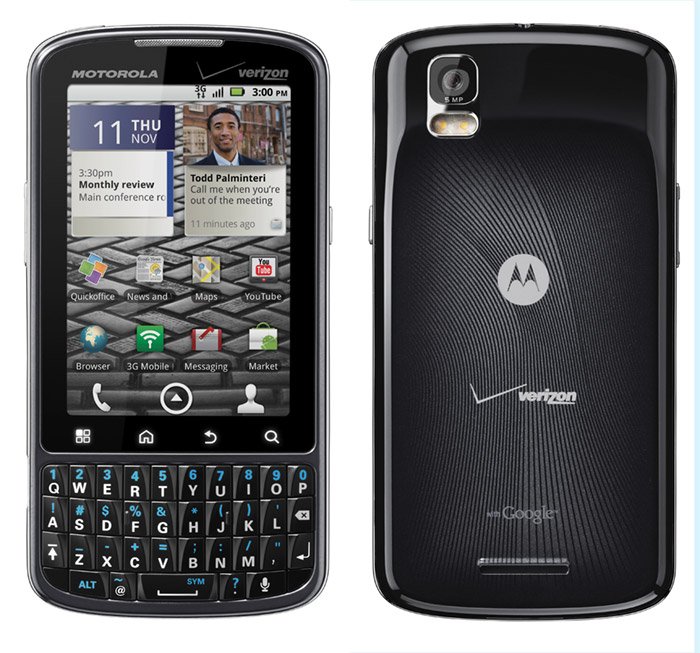 Let’s say you are in love with the looks of the Blackberry (seriously, who isn’t?). But then, you also want to use the Android app market (again, who wouldn’t?). And you know that you can’t have both of them in the same phone. So you decide to buy both so that you can drool over the beautiful Blackberry and marvel the Android apps. And then, just before buying, you are reminded of your budget. What next? Panic not. Motorola and Verizon’s $ 180 Droid Pro comes to your rescue. The pre-orders have already begun, and the shipping is expected to start anytime around 18 November.

Just like its predecessor, Droid Pro also flaunts a mighty set of features. To begin with, we have a 3.1 inches wide touchscreen, a full QWERTY keyboard, a 5 MP still and video camera, a modest 4 GB memory (with 2 GB internal), Wi-Fi and 3G connectivity options – all managed by a 1 GHz processor. Talking in terms of softwares, the Android 2.2 (Froyo) OS is coupled with Adobe Flash Player 10.1, QuickOffice Productivity Suite and in-built support for push email and calendar from both Google and Exchange. Sounds good right? Wait, there is more to come. The device is also expected to have security features such as VPN integration, remote wipe and complex password support to be followed by device and SD card encryption in early 2011.  Two more notable features:

The Droid Pro is expected to cost nearly $279.99 up front with a two year service agreement followed by a 100$ Verizon debit card later in the mail. So that means it will be $20 cheaper than the iPhone, most Windows 7 phones or even Motorola Droid X. With affordability on its side, expectations from Droid Pro are indeed high. Pre-orders for the Android 2.2-based Droid Pro begin today.