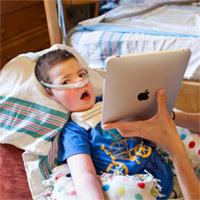 Technology and innovations are fruitful if they serve the basic purpose – of being useful to humans. It further helps the machine’s USP if the human is disabled or impaired. Something similar happened with the iPad when Owen Cain, an 8 year old suffering from debilitating motor neuron disease, was able to use it. Young Owen couldn’t possibly have moved a computer mouse, but when he got to lay his hands on an iPad, he managed to do something which astounded the rest, and ‘astounded’ here is a weak word. Owen was able to launch a music application on iPad during his first use (ok, this might have an element of luck in it, but still, many people can’t do anything beyond admiring the iPad on first look).

Since its launch, iPad has become a popular therapeutic tool for the disabled. Though official figures for such uses of iPad are unavailable, several studies are being conducted to test iPad’s effectiveness for the same. Christopher Bulger, a 16 year old from Chicago, had his hands clenched into fists due to a spine injury. Yet, during the period of recovery, he relied on a trustworthy companion for surfing the Internet. No prizes for guessing: it was the iPad.

This unique popularity and usability of the iPad can be attributed to features such as magnification, closed captioning and audible readout functions.  Such features were perhaps meant to make the iPad simple for use, but they have indeed come as a blessing for the disabled. What further helps the iPad’s cause is the fact that it is comparatively cheaper than most other machines/computers designed for the disabled.

And finally, coming back to Owen: though he cannot yet move his fingers all the way across the keypad, he has been using his iPad to read ebooks and play Air Guitar. [NYTimes]