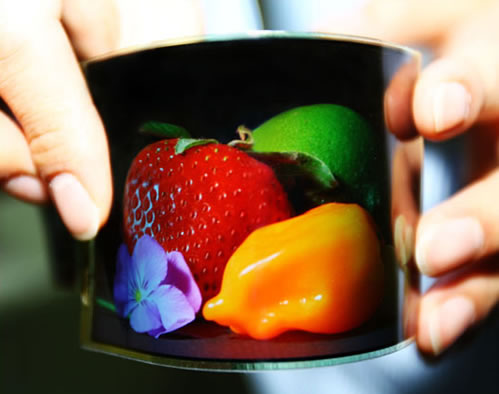 A number of gadgets, mostly those that are hailed as the technological miracles, do have a tendency of luring us in by popping up at trade shows.   Disappointingly, very few of them do manage to make it to the stores shelves while we can still remember them.  However, according to fresh reports doing the rounds at the FPD International 2010 trade show, the Samsung mobile display is definitely not looking to be included in the forget-me list. Samsung hints that their 4.5 inch flexible AMOLED might actually be very near to completion as a mass produced unit.

The latest reports also disclose that Samsung has decided to go in for a plastic version instead of the more conventional glass substrate. This makes sense too, as the former is bound to be much more convenient for mass production.  The 800 x 480 resolution is really quite exciting and we just hope that the availability of a new fangled gadget utilizing the technology is not too far away .

The news has also seemed to have spawned a number of arguments lately with most of them being just a little apprehensive about the super-portability factor. The durability factor is also expected to come in to play here.  A phone with a flexible AMOLED screen is making us curious indeed!  A panel which can be folded up to a small radius of 1 cm, springing back into the original form without losing any of its functionality is still a little too difficult to fathom.

The hype generated around this AMOLED may be worthwhile for its makers, especially if it manages to live up to its promise of making the smartphone even smarter or wearable.