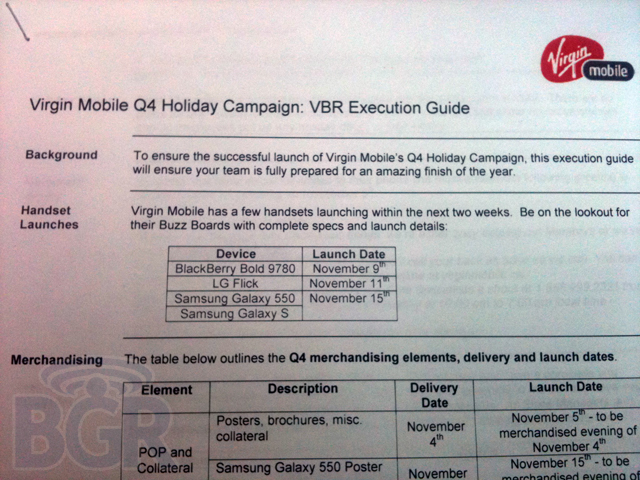 Virgin Mobile, in many respects, is meant to be a second-tier carrier. After all, it’s basically the little brother to big bro Bell. That doesn’t mean that its phone selection is coming up short though, as evidenced by a leaked Q4 roadmap.

You can already find the HTC Legend at Virgin Mobile Canada, but more Android is on the way in the form of a Samsung Galaxy S. It’s not quite as clear when it comes to what version of a Galaxy S is on the way, but it does indicate a November 15 launch day. That’s the same day as the Samsung Galaxy 550, which is also known as the I5500 and Galaxy 5.

That is, unless the mention of the Galaxy S is a typo altogether and we are only expecting the Galaxy 5. I can see how someone would confuse a 5 (five) with an S (ess). Either way, it’s an Android thing.

Prefer something else? On November 9 (next week), Virgin Mobile Canada plans on launching the BlackBerry Bold 9780. This is just a minor upgrade from the 9700, but it’s an upgrade nonetheless.