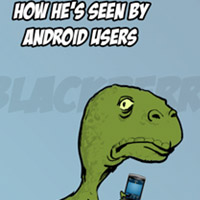 They say that perception is 95% of reality. The trouble is that everyone’s perception is a little different and there are few places where this is more evident than among smartphone evangelists. Are you an Apple fanboy (or fangirl)? Well, other people don’t see you in the same way that you see yourself.

Depicted here is a clever graphic from the folks at C-Section comics. Let’s take the iPhone user as a prime example. According to this, most iPhone users will probably see themselves as hip and fashionable. Unfortunately, BlackBerry users will view the same iPhone owner as childish and immature. And the Android user? Well, she sees the iPhone owner as a cult-ish witch.

It’s not like the other platforms are immune to these ill-conceived perceptions either. The typical Android user might see himself as a brilliant Einstein, but the iPhone user will see the Android owner as a pimple-faced dork. Not good.

Yes, these are all exaggerated versions of reality, but there is some truth to this. The Android guy probably does see the BlackBerry owner as an ancient dinosaur. And where do I, as a Nokia Symbian user fall into the field? Probably as a nondescript wallflower that very few people notice.