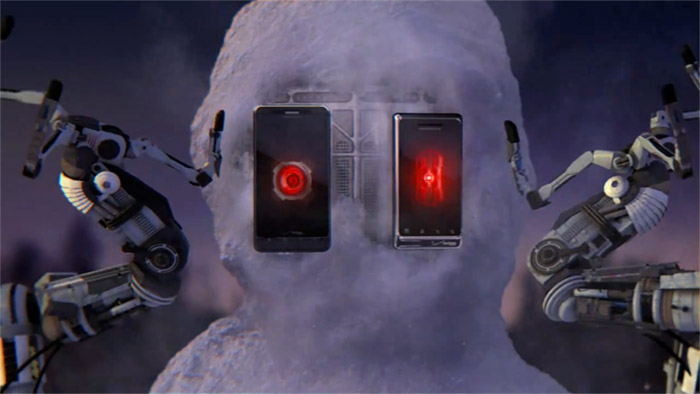 It feels like just yesterday that I was handing out chocolates to the trick-or-treaters, but the Christmas commercials have already started to populate our airwaves. One of the latest comes by way of Verizon to advertise its Droid line of phones and this almost “Nightmare Before Christmas” material.

Coke might have its polar bears, but Verizon has a big scary robot disguised as a kindly snowman. And it’s awesome. I really like the Droid commercials from Verizon, mostly because they remind me of things like Terminator, and this one adds a little festive flair to it. Bow down to your snowbot overlords.

The TV spot is used to promote the Motorola Droid 2 and the Motorola Droid X, which are shown as the “eyes” of the snowman. As one of the tree branch arms fall off the snowman, that now iconic robotic arm emerges. I’m not sure if these marketing tactics appeal to everyone, but most geeks like me probably dig it.

One other takeaway from the ad is that the price on the Droid 2 has dropped fifty bucks down to $149.99. Could it be that they’re looking to clean out the stock in preparation for a successor? You know, like the Droid 2 Global?