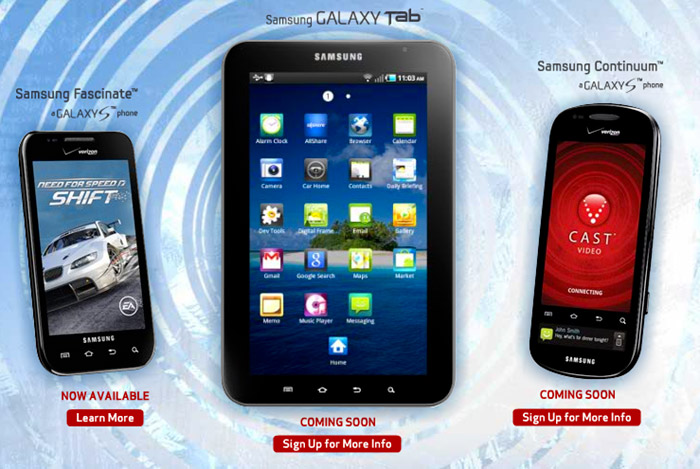 Let’s see here. Verizon already has a Galaxy S phone in the form of the Samsung Fascinate. It will soon also have the Galaxy Tab to cover the Sammy-flavored tablet market. So, they’re done with that, right? Apparently not.

Taking a look at the Galaxy teaser page on Verizon, it looks like Big Red is prepared to add another galaxy device to the universe, and its the Samsung Continuum. Interestingly enough, it’s another Galaxy S phone, making Verizon the only carrier (that I know of) with two such devices.

Since it rocks Galaxy S, it’s safe to assume that Android will be under the hood, along with TouchWiz 3.0 for the user interface. The Super AMOLED is there too, but there’s a smaller “ticker” screen underneath for smaller updates. This is sort of like the original Nook eReader, but not really. Personally? I think it’s largely unnecessary for a slate phone like this.