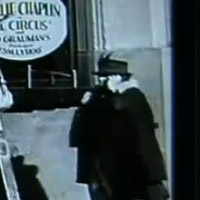 Bullshit or not. George Clarke was watching a 1928 Charlie Chaplin film and spotted what he believed was a hefty woman, perhaps a man, talking on a cell phone while walking out of the circus. Now, hold up, as crazy as this sounds, the YouTube videos trying to debunk it are even crazier.

Clarke claims that the thin black bar is held the same way cellphones are held today, and that the man or woman is walking and talking, then looking at the camera. So how can it be? Was this video editing at its finest? Possibly. Was it a holodeck projection from showing only a 75% transmission of a human being from the year 2059? Probably not. Was it even a 1920s vacuum tube hearing aid? Maybe, if the suspected time traveler was in fact a crazy lunatic.  But you know what? The man has that scattered, disconnected type of mannerism that most people have while walking and talking on a phone. They even stop and look around to get a hold of their bearing as many people do when they walk and talk.  If it was indeed a man from the future, what would be the most inconspicuous disguise for that era? And how could they have a cellphone connection? Assuming we can even grasp how they could have traveled back in time.