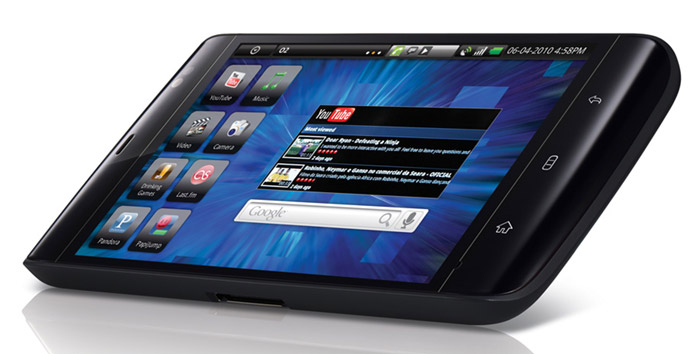 Let’s say that you’re interested in some Android action. Let’s also say that you’re undecided on whether you want to do that in smartphone form or tablet form. And maybe you like Rogers. If that’s the case, we’ve got some good news: the Dell Streak has arrived.  Well, sort of. Rogers isn’t quite ready to sell this in-between device just yet, but the dummy version of the handset has started arriving at various Rogers outlets across the country. Just as dummies of the Captivate showed up, the real thing went on sale a couple weeks later, we can probably expect the same for the Streak. This would put the release some time in November.

As a quick reminder, this smartphone-tablet features a 5-inch WVGA display and a 1GHz Qualcomm Snapdragon 8250 processor. I think it’s a little too big to hold up to your head, but it could be a little too small to be a proper tablet. I have at least one friend who loves this “neither here nor there” size, though.

The Dell Streak will ship with Android 1.6 preloaded, but an upgrade to OS 2.1 should be made available shortly after launch–i’m assuming. The rest of the specs call for 512MB ROM, 512MB RAM, microSD expansion, 5MP camera, front-facing VGA cam, GPS, Wi-Fi, and a 3.5mm headset jack. No word on price, but I wouldn’t be surprised to see this for $299 on a three-year.