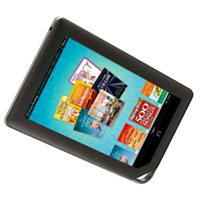 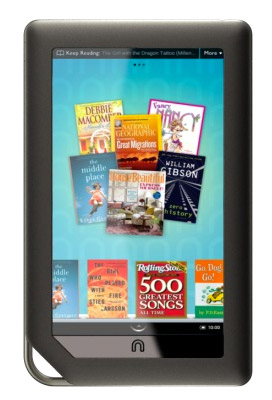 Barnes & Noble this week let the NOOKcolor out of the bag. They claim it’s “the first full-color touch Reader’s Tablet to deliver digital books, magazines, newspapers and children’s books.” I guess they haven’t seen that thing called the iPad yet. Even still, at half the price you’ll get access to B&N’s gigantic library of over 2 million titles, NOOKnewsstand with publications coming from Conde Nast and Hearst; The Wall Street Journal, The New York Times and USA TODAY to Rolling Stone, Esquire, US Weekly, National Geographic and the list goes on. Children’s books are a plenty, with 130 picture books available, and 12,000 chapter books. B&N also plans to offer interactive content, since this really is just a “heavily customized” Android tablet, the Nook can play MP3 and MP4s, as well as gain access to “a growing collection of multimedia titles offering instructive video and audio to learn about travel, cooking, music and more” in the near future.

Hardware
It’s a 7-inch touchscreen tablet, with 1024×600 resolution 16 million color display. This doesn’t sound entirely impressive, especially since the PPI is just 169. If you compare that to the iPad’s 132 PPI it does sound great, but the iPad is 9.7-inches and not really that fantastic for rendering text to be read for long periods of time. For comparisons sake, the iPhone 4’s “retina display” is 326 ppi. Perhaps next year we’ll see an iPad with retina display.  An accelerometer allows auto-rotation from tablet to portrait mode.

Wi-Fi is its connection point. No 3G at all this time around. With 8GB memory on board and a microSD for adding 32GB more storage. It measures 8.1 x 5 x 0.48-inches and weighs 15.8 ounces. What we would expect for a tablet its size.

Battery life claims to be 8 hours with Wi-Fi turned off. This is a color LCD, so we’re not going to see any impressive performance we’ve come to expect with e-ink readers.

Software
We’re thinking this is a heavily customized Android tablet skinned the Nook way. What leads us to this is that Gizmodo reported on how apps from Android devices will be an “easy port” for the NookColor. It won’t have access to the Android Market, but by the sounds of things B&N may be making their own market. As apps will become available down the road, but only from a handful of companies.

The Nookcolor will feature a LendMe app exclusive to this device. It allows you to “lend and borrow” favorite books from friends.

Magazines and Newspapers appear to be simple static renders, or customized html sites. We’re not seeing the interactive content we have all be dreaming of since that very first Wired magazine flash video surfaced. 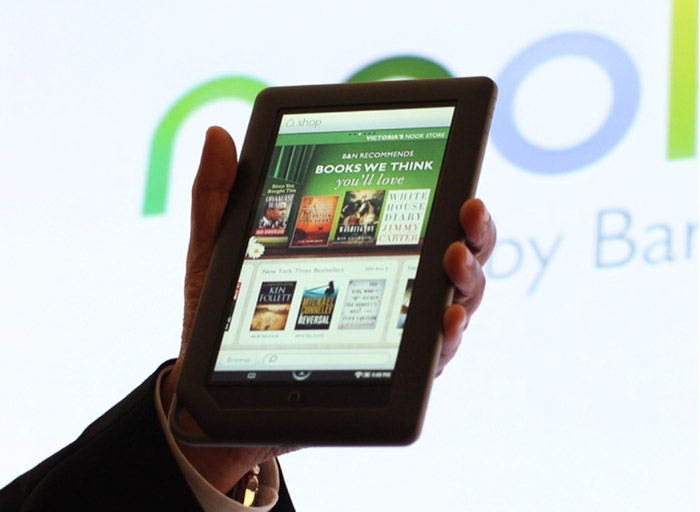 Social Networking
Of course this could not be left behind. You’ll have the ability to share comments about whatever you are reading with your FaceBook and Twitter friends. You can even post a quote from a novel or magazine.

Pricing & Availability
It’s going to ship on or around November 19, 2010 with pre-orders on now. B&N set the price at just $250, we’re not sure what’s running inside the ColorNook, so the low price-point may be a result of mediocre internals.