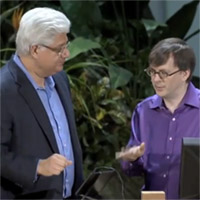 Mike Lazaridis, President and Co-CEO of RIM jumped on the mic during the Adobe MAX conference with Kevin Lynch, CTO of Adobe. They gave the first live operation preview of the PlayBook ever. It really looks smooth and intuitive, I’m super impressed by the multitasking ease. Adobe Air apps are going to give some serious competition to Apple, especially for providing app solutions to the medical industry and other professionals. The Adobe Air skin media player is very quick and plays HD with ease. They even show the YouTube site playing videos, yes, it’s not a “dumbed down internet” it’s the full experience.

“If you write a new air application and its accepted to BlackBerry Appworld, you’ll be eligible for a free BlackBerry Playbook.” concluded Lazaridis.