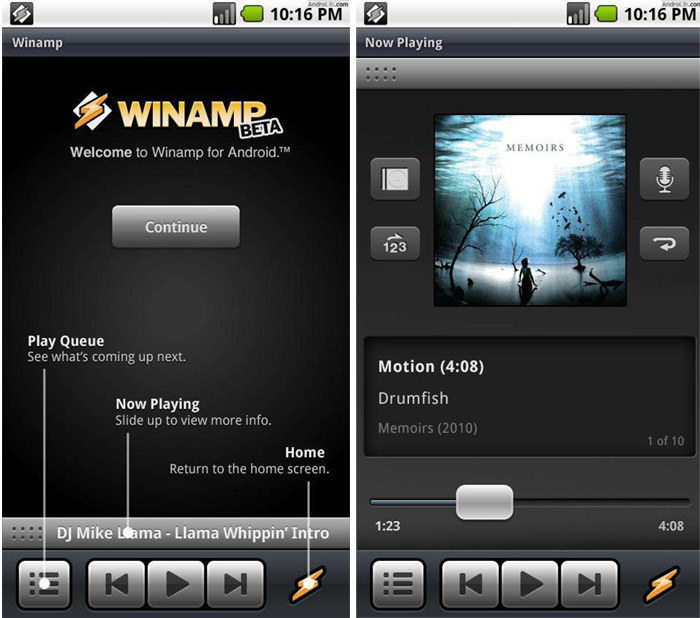 I remember when my parents first got the internet at our house in the mid-nineties and I learned how to download mp3s. I used an awesome program called Winamp to play these mp3 files on my computer. Since then, I had totally forgotten about Winamp. As far as I knew, Winamp was gone. It had been overshadowed by the other major media playing applications (iTunes, Windows Media Player, etc…) Now, Winamp is in the news again, releasing an app for the Android operating system.

Now, the thought of just another media player for the android sounds pretty boring. Android has a native media player, and there is also DoubleTwist, which is like an Android version of iTunes. Winamp for Android does have some pretty cool features though.

One of the things I like the most about Winamp for Android is that the playback controls stay docked to the bottom of the screen at all times. The rest of the window will change as you navigate through playlists, album/artist info, Album art, search results, and other features. Overall, the user interface is very clean, very easy to navigate, and looks stellar. Within the Winamp home screen there is a handy search function that allows you to find specific songs and artists, and a history tab that allows you to view what you have recently listened to. Rounding out the homescreen are buttons for Artists, Albums, and Songs.  This app also features a very convenient homescreen widget that provides playback control and album art.

Perhaps Winamp for Android’s coolest feature is the ability to sync your library via Wi-Fi. Using the latest version of Winamp for the desktop (Yes, they still make it!) You can go into the options and enable Wi-Fi sharing, and your phone will show up under the devices.  Just pair the device to your desktop and the files will immediately transfer to your phone.

So overall, I think Winamp for Android is definitely a good download choice. The thing I like most about it is the Wi-Fi sync. Sure, you can sync via Wi-Fi with DoubleTwist, but I think Winamp is a much better program, both on the device and the PC.  The only thing I would add to Winamp to make it a perfect DoubleTwist replacement is the option to listen to Internet Radio. I love me some Shoutcast!