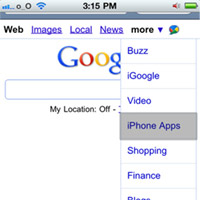 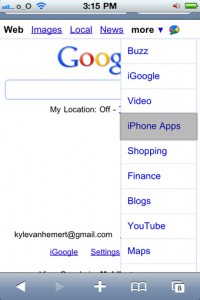 If you’re using Google Mobile to search for things on your smartphone, there’s a good chance you may be interested in two new special features.  Google Mobile on the iPhone now has “iPhone Apps” under the “more” pull-down menu. Using that, you can find whatever apps you want for the Cupertino-sourced device. I’m thinking that it’ll only show the official stuff, but who knows? Maybe it’ll expand into Cydia and other jailbroken-only apps too.

For the more Google inclined, Google Mobile for Android has the suitable “Android Apps” category tossed in for good measure now. This does the same thing as the iPhone version, except it looks for applications being offered through Android Market.

Is this addition redundant? Yeah, a little, but if you’re going to use Google to look for everything on the Internet, you may as well look for your apps on there too. I wonder if they’ll do the same for Windows Phone 7? Or does Bing have that cornered?