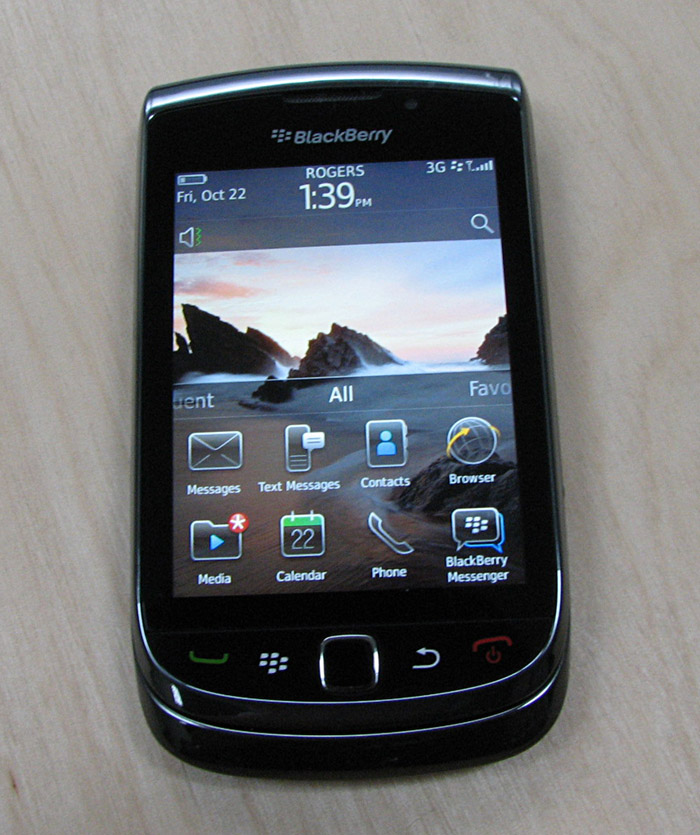 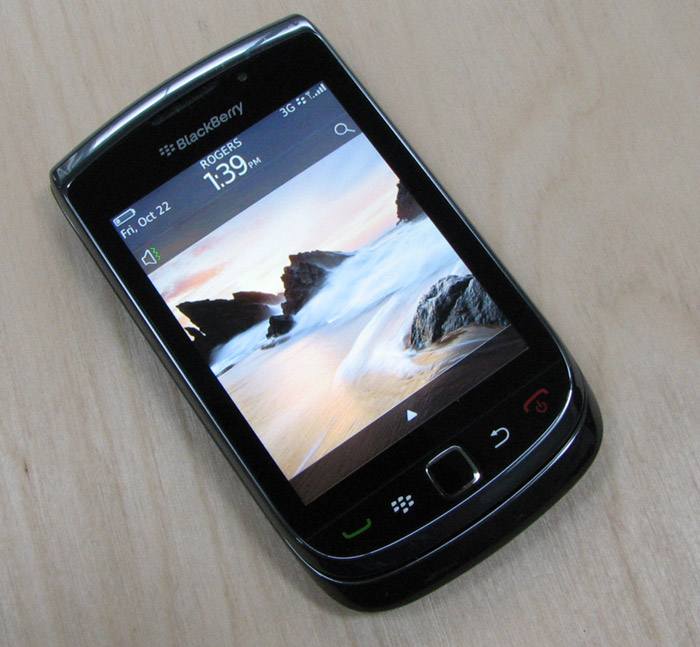 Remember when the BlackBerry Storm was supposed to be RIM’s answer to the iPhone? It didn’t quite enjoy the kind of success that Jim Balsillie and crew would have wanted, but here we find ourselves again with another supposed iPhone killer in the form of the BlackBerry Torch 9800.

The Rogers version of the device is being featured in this review, but it is also available through other carriers both in Canada (Telus) and the United States (AT&T), as well as international carriers (T-Mobile, Orange, Vodafone) around the world. As a brief overview, the Torch comes with a 3.2″ (480×360) touchscreen, slide-out QWERTY keyboard, BB OS 6.0, and a 5.0MP camera.

What’s Inside the Box?

No huge surprises as to what is included alongside the RIM smartphone. The BlackBerry Torch comes along with the usual documentation, user tool CD, cleaning cloth, stereo headset, USB cable, and wall charger adapter. It’s a minor detail, but I do like the design of the charger adapter, as it provides the USB port on the side instead of straight out the back. This makes it easier to use when you have a desk pushed up completely against a wall, for instance.

Unlike other BlackBerry devices that I have reviewed, the Torch 9800 does not appear to come with a carrying pouch. Again, this is a minor quibble and you’ll probably end up buying some aftermarket case on your own anyhow, but it is an interesting omission. 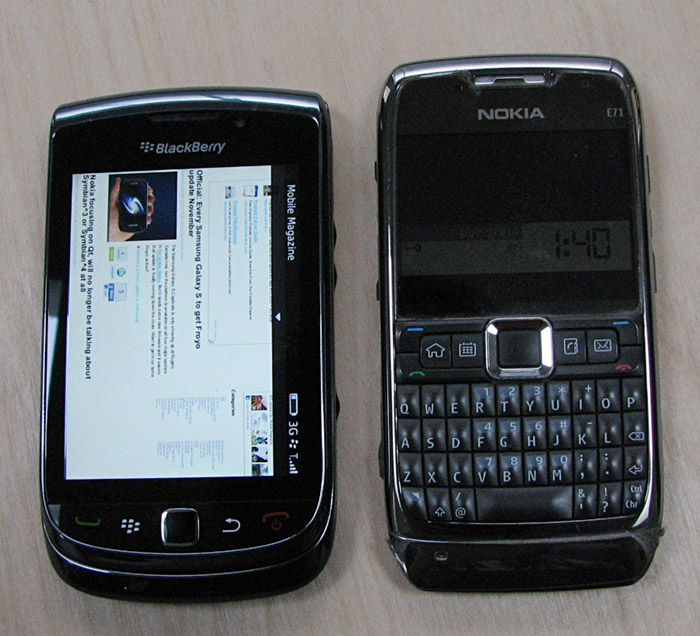 The Torch is a little bigger than I expected, but that could be because I’m coming from the perspective of the much slimmer Nokia E71. There is a fair bit of “heft” to the Torch, both in terms of weight and just how it feels in your hands. You get a sense of a quality product, but it’s a little too big for my tastes.

Interestingly, when I held it next to the original BlackBerry Storm, I found the overall dimensions to be quite similar. If you’re a Storm person, you’ll feel right at home with the Torch. It still has a touchscreen, but it doesn’t “click” in like how the first-gen Storm did.

I very much prefer physical keyboards, so I thought the Torch would provide the best of both worlds, much like how I thought the same of devices like the Palm Pre. In theory, it’s a decent idea if you’re okay putting up with a little bit of a thicker profile.

By and large, this mechanism works well for the Torch, but this comes with a caveat. It is a RIM keyboard, but it is narrower than what you’d find on the Bold or the BlackBerry Curve. This is because it has to make way for the slider channels on either side. The resulting ridge on either side also takes away from typing comfort. Even so, the keyboard works quite well and I appreciate its inclusion. 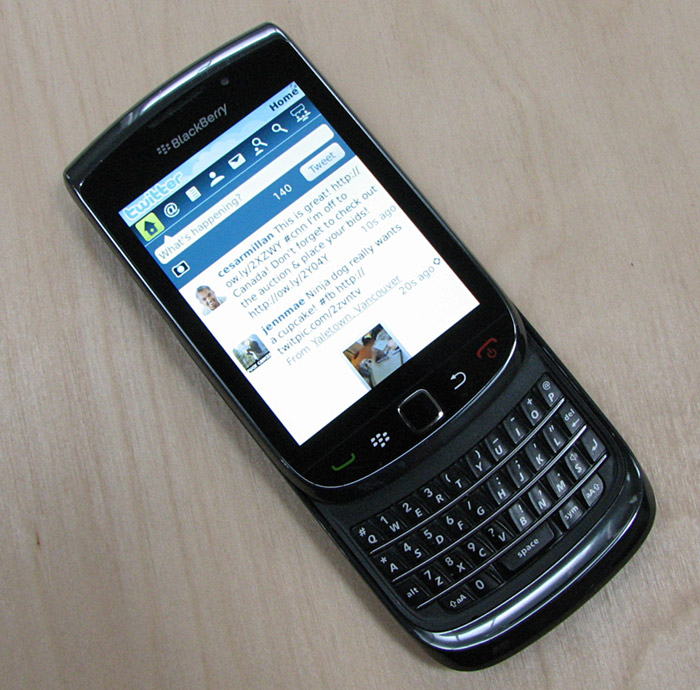 The new operating system from Research in Motion will get pushed out to its other devices, but the BlackBerry Torch is where OS 6.0 is being highlighted. This is especially true because of the touchscreen interface.

For me, the biggest improvement is how the “dock” works on the home screen. By pulling on the dock, you can determine whether it shows one, two, or three rows of icons. Pull it up all the way to access the full list of applications.

Further still, you can swipe horizontally to move between different categories of apps, like downloads, media, and favorites. In an increasingly app-centric smartphone world, this increased organization and customization is certainly appreciated.

The Torch comes with direct uploads to YouTube, as well as pre-installed Facebook and Twitter applications. For these kinds of uses, you’ll want to have a decent camera and, by and large, the Torch’s five-megapixel shooter delivers.

As can be expected, its low-light performance leaves much to be desired. You really do need to use the flash when the lighting is less than ideal. The low light picture is grainy and lacking in detail, but a similar picture with Flash turned out quite well. RIM has jacked up the contrast and saturation, it seems, as the colors really “pop” off the screen.

When I read that the AT&T version of the BlackBerry Torch 9800 was getting less than favorable reviews, I wasn’t all that surprised. RIM has come up short in several areas, but it manages to survive because of its increased security and close corporate contacts.

For my part, I can see how the Torch has its share of shortcomings — like the low resolution display — but it’s still a very solid smartphone. Combining the large touchscreen with the physical keyboard is a great “best of both worlds” solution for people like me. The build quality is great, as always, but it’s definitely on the bulkier side of things.

The browser renders websites quite well, but you will need to zoom in to get reasonably legible text. The RIM keyboard is fairly good, aside from its slightly smaller size and the ridges on the edges due to slider rails. And it’s nice to see that RIM  finally came to their senses, having BlackBerry App World, Twitter, and Facebook pre-installed on the device, as well as the Social Feeds amalgamator. BB OS 6.0 is more aesthetically pleasing too.

The BlackBerry Torch 9800 currently sells for $199 from Rogers with a qualifying three-year contract, or $199 with a two-year contract on AT&T.