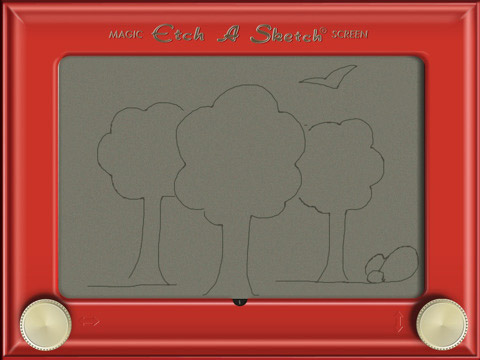 I wouldn’t compare the iPad to an Etch A Sketch, but there’s a Boogie Board that is basically an evolution of that technology. Continuing world domination of every possible use a tablet could have, the iPad now is an Etch A Sketch.

It’s official, and has been released by Freeze Tag Games for the Apple iPad. Etch A Sketch HD is a remake of the classic doodle device many of us grew up with. Only this time, you can actually save those “masterpieces.” You’ll be doodling over top photographs, and posting those doodles to Facebook if you shell out the $3 for this app. I haven’t tried it, but from the looks of the screenshot you just scroll the dials as you would in a traditional etch a sketch.