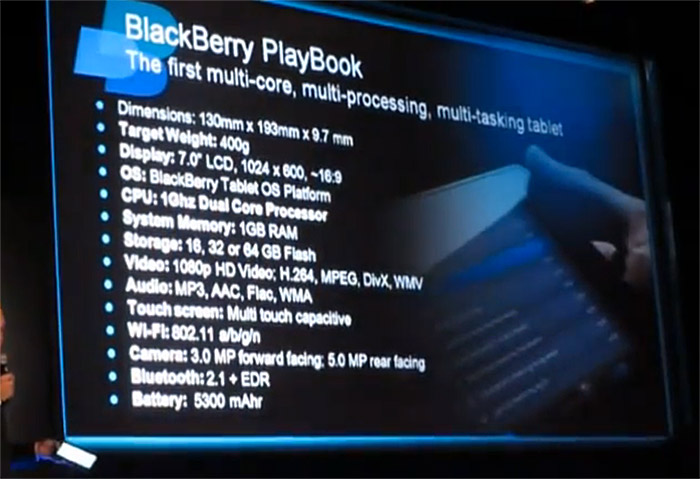 Most of the main specifications for the upcoming PlayBook tablet from RIM are already out there, but a few more details have been revealed to give you a more complete picture. For example, the storage capacity options will mirror that of the iPad, giving consumers the choice of a 16GB, 32GB, or 64GB model. There’s no 3G connectivity in the PlayBook, as far as I know, because they’re selling it as a device to be tethered to your BlackBerry when you need access to the Internet. It’s interesting that, in the video below, the presentation shows that it’ll use the “BlackBerry Tablet OS Platform” when we know it’s a QNX OS under the hood. Is that really the name they’re going to use?

Most of the other features have already been announced, like the dual core 1GHz processor and 1GB of RAM, but you’ll also notice mention of a 5300mAh battery under the hood. When you consider that many laptop batteries are only in the 4000 to 5000mAh range, the PlayBook should last a very long time on a single charge.

I’m not convinced that the PlayBook will be an iPad killer (just as much as I didn’t think the Storm was going to be an iPhone killer), but it may be very appealing to people who are already coming from the BlackBerry side of the field. So to speak.