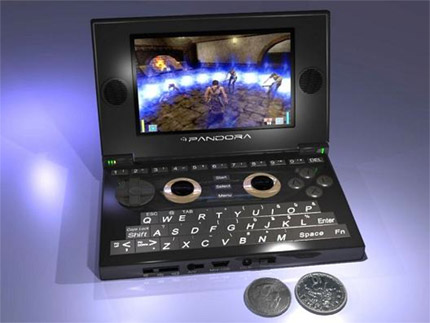 Pandora project, the ultra-portable linux-based handheld mobile gaming console that took on pre-orders in 2007,  just shipped 900 more units.  The makers of Pandora have been struggling with nubs, apparently its not easy to make a nub you know. The quality has to be just right, this led them to replace the first 150 sub-nub units that were sent out earlier in the year.  Pandora went back to the drawing board not once, not twice, but three times to get the nubs just right; and after all that, the nubs are now fast and should last over 300k of actuations.

With it’s dated internals and design, the first batch of 3000 Pandora cases (the actual plastic molding) have been painted and received, the guys spent $5000 USD on shipping them from wherever (China I suppose).  They say the next batch of 3000 will be sent via container to cut costs.  FedEx must love them by now.

The Pandora Logic boards are being made in Texas, which are shipped to the UK (home of Pandora) for assembly. This is quite the manual operation; these guys are soldering the LCD cables manually to each and every board. Craig, one of the main guys behind it all – also behind the iControlPad – are prepping all 2000 cases for the boards by hand as we speak.

This is just a small snippet in a day in the life of a Gadget Maker;  it may also give you a quick glimpse of what it’s like to manufacture a real product – rather than just to use it.    Now after three years of taking orders, with several thousand units sold, and who knows how long of a preliminary planning stage, the Pandora is finally coming to fruition.  Of course, with a hell of a lot of blood and sweat from the Pandora team; who include Craig Rothwell, Michael Weston, Michael Mrozek, M. Fatih KILIC who have all probably pondered a few times “what if we outsourced it to China.”  But would it have been the same? I don’t think so.  This is what the big guys do, it comes in the form of a mobile phone to the shirt off your back.  It would have been on the market much faster that is for certain , and probably would haven’t been so dated by now. But the Open Pandora project is just that, a project, and its open for the world to continue upon.

When you don’t have millions of dollars of equity to dispose of, when you have a conscious and wan’t to do as much of these things on your own as possible, the Open Pandora project was the only way to go.

I’m sure if you ever thought of manufacturing a device on your own you may now reconsider, the CrunchPad is one good example of it just not happening. That leads me to ask the question, will we always be dependent on foreign labour to get these luxurious goods we use today? I sure hope not, and would pay more to have less to have something come in a more sustainable way.