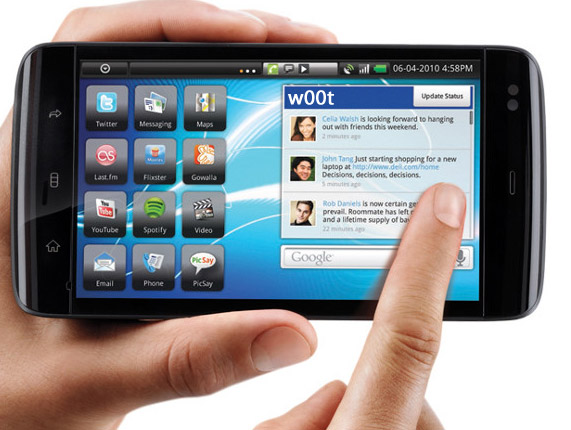 Rogers is taking shape to be a leader of Android handset offerings. We know the Samsung Galaxy S Captivate should be launching shortly, and now we know it’s getting hitched up next to the Dell Streak. Rogers could be called the AT&T of Canada.

Remember the old Axim line of PDAs? Well, the Streak line should be a little more popular, even if it’s size is unconventional. That 5-inch multi-touch display makes it a little too awkward to hold up to your face for phone calls, a little too small to compete head on with the 7-inch Galaxy Tab and 10-inch iPad, perhaps that was Dell’s plan all along.

The Dell Streak is one of those devices for people who simply cannot make up their minds and end up somewhere in the middle. It’s also odd that Android 1.6 Donut, is shipping on it. You’d expect something in the 2.x family of Android platforms at the least.  Where will that leave you once Android 2.3 is in the wild?  If the “dealer merchandising materials” sheet is any indication of what is to come, those hollow dummy models of the Streak will hit physical shelves later this month;  an official device launch would follow early November.