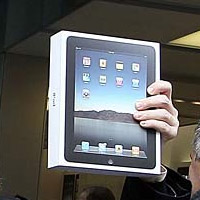 If you’ve been itching to get your hands on an Apple iPad but you want to latch onto the “can you hear me now” network for wireless surfing, it looks like you’re in luck. Not only is Verizon going to start selling the Apple tablet; it’s going to bundle it with some MiFi action to boot.

The caveat is, from what I can gather, these are just the WiFi-only versions of the iPad and not the 3G model. After all, the 3G-ness won’t work on the Big Red’s network anyhow, which is why they’re doing the MiFi business in the first place. If you already have a MiFi, you can jump over to a Verizon store to buy the 16GB, 32GB, or 64GB iPad on its own for $499, $599, and $699, respectively.