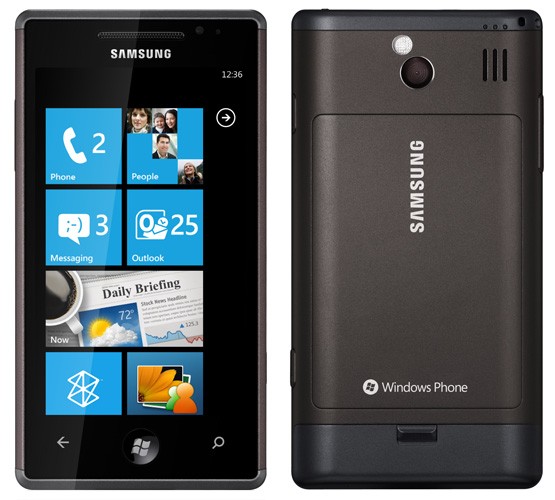 Windows Phone 7 is a pretty big deal for the boys and girls in Redmond, Washington. Windows Mobile hasn’t exactly been the most popular of mobile platforms, so WP7 could represent quite the revival for Microsoft. When is that going to happen? For AT&T folks, one of the biggest dates to circle is November 8th. That’s when the Samsung Focus will show up on AT&T store shelves. The Focus is the official name of the Samsung Cetus that we saw earlier, it’s also AT&T’s name for the Samsung Omnia 7; whether it’s an entirely new phone or just the new name of the phone we already saw, it looks like were going to be pretty satisfied with the internal hardware.

The Omnia 7 snags the 4-inch WVGA Super AMOLED display we’ve seen in the Galaxy S, possibly the same 5.0 megapixel shooter too, and has a microSD expansion slot for up to 16GB. SFR, Movistar, T-Mobile and Orange in Europe will get the same Omnia 7 with either 8GB or 16GB variants. AT&T will be offering it up for $199. Press release follows.

AT&T will also bring the HTC Surround and LG Quantum Windows Phone 7 devices to their lineup.

UPDATE: The Samsung Focus has been announced in Canada, but no availability or pricing info yet.

Samsung OMNIA 7 Delivers Breakthrough Entertainment for Your Life in Motion

October 11, 2010, SEOUL, Korea – Samsung Electronics Co. Ltd., a global leader in mobile technology, today announced the launch of the Samsung OMNIA 7 (Model: GT-I8700). Designed for a lifestyle in motion, the smartphone will be the first device to launch from Samsung with Microsoft’s Windows® Phone 7 platform across Europe and Asia. Samsung OMNIA 7 supports a 4-inch SUPER AMOLED touch screen, 1GHz application processor and a 5 megapixel camera. The phone offers an unparalleled entertainment experience directly on the mobile with Xbox LIVE® features and games, and Zune® music and video. The OMNIA 7 will be available in select markets during the holiday 2010 timeframe.

“The Samsung OMNIA 7 is our first Windows Phone 7 smartphone and we anticipate that consumers will be drawn to the premium entertainment experience. The device demonstrates our commitment to satisfying consumers with a choice of platforms that fit diverse needs,” said JK Shin, president and head of the Mobile Communications Business at Samsung Electronics. “We are excited to partner with Microsoft for this milestone,” he said.

“Samsung has been a key partner to Microsoft in bringing Windows Phones to customers all over the world,” said Andy Lees, President of the Mobile Communications Business at Microsoft. “Their launch of the Samsung OMNIA 7, a new Windows Phone, marks a significant step in delivering to customers a different kind of phone that will stand out amongst the competition. We are thrilled to continue our strong partnership and embark on this journey with a smartphone industry leader.”

Featuring Samsung’s crisp and clear 4-inch SUPER AMOLED touch screen, the OMNIA 7 delivers a brilliant viewing experience, even outdoors. With surround sound and clear voice quality, users can talk to a friend or conduct a conference call as if they’re in the same room. The OMNIA 7’s good looks and metallic body make it a stylish companion for any setting and the phone’s minimalist design and clean finish will entice consumers who don’t want compromise style for technology.

With Samsung OMNIA 7, users can access Xbox LIVE® and Zune® directly on the mobile for the ultimate entertainment experience. Gamers will enjoy a diverse lineup of titles through Xbox LIVE whilst multimedia buffs will be keen to access a host of video and music content through Zune. The OMNIA 7 enables users to automatically synch content from their PC via Wi-Fi so that they can enjoy music and videos anywhere.

Samsung OMNIA 7 offers a different kind of experience that lets users keep up with lifestyle. Users will love the intuitive, dynamic user interface of Windows Phone 7 whilst the Windows Phone Hubs help them to organize information and simplify tasks. The phone’s customizable Start Screen features live Tiles that display real-time updates from the web, news, appointments, or social media status directly to the home screen.

Enhanced media sharing is another feature of a life in motion. On the OMNIA 7, users will have access to an expanded catalog of social networking and photo sharing sites and can share images and media files with friends with a single touch. The device even includes a 5 megapixel camera with LED flash so that you capture, create and share your life in motion.