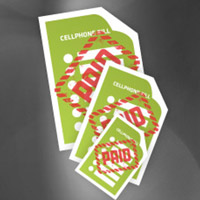 Buying a new smartphone isn’t all that expensive anymore if you’re willing to latch onto a new service contract to do so. The monthly bill, however, can add up really quickly and bite deeply into your budget. Motorola wants to help… sort of.

They’ve just announced a new contest where ten lucky people will get their cell phone bill paid for the entirety of the 2011 calendar year. That can easily translate into several hundred dollars each, which is pretty good. The site says that you’ll want to buy a new Motorola smartphone but the official rules state that no purchase is necessary. It’s all about reading the fine print. That said, even if you’re not one of the ten winners, you still get a little bonus for buying a Moto handset. If you send in the form, sales receipt and UPC by November 30, they’ll give you a Cineplex Night Out movie ticket. Right. Because a $30 bonus is worth dropping $200 (and signing a contract) on a phone.

You should also note that this is only for Canadians. You’ve got to throw them Canucks a bone from time to time, you know. Maybe that’s enough to inspire that move to the land of the green?