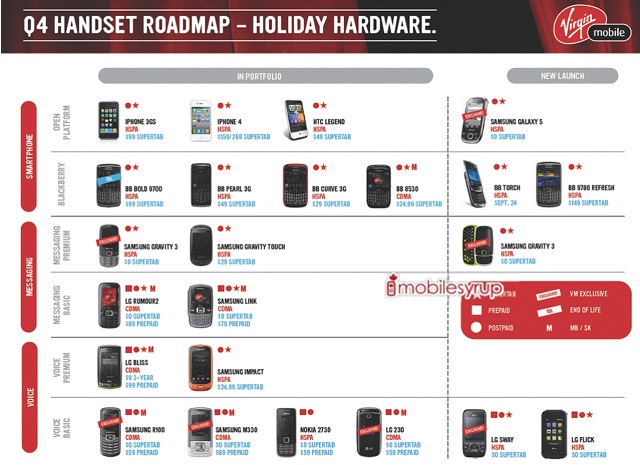 It used to be that Virgin Mobile was the cheap alternative and it was loaded up with all the cheap phones. That’s not the case anymore, because the carrier is getting just as many hot devices as its big brand counterparts. Looking at this leaked Q4 roadmap, there are more than a couple phones to catch your attention.

For the BlackBerry-touting folks in the audience, the two handsets that will likely catch your eye are the BlackBerry Bold 9780 and the BlackBerry Torch. The former is slated for release on October 21 and the Torch shouldn’t be that far off either. If Android is more your thing and the HTC Legend didn’t cut the mustard, you might want to take a look at the Samsung Galaxy S. It’s not entirely clear which version of the Galaxy S that Virgin will be getting, since there are so many, but it’s a reasonably safe bet that it’s the same as the one that Bell gets. Rounding out the list of new launches are the Samsung Gravity 2 messaging phone, LG Sway, and LG Flick. These aren’t as exciting as the smartphones, but they’re probably more affordable. The lines are blurring, my friends, between budget and mainstream brands.