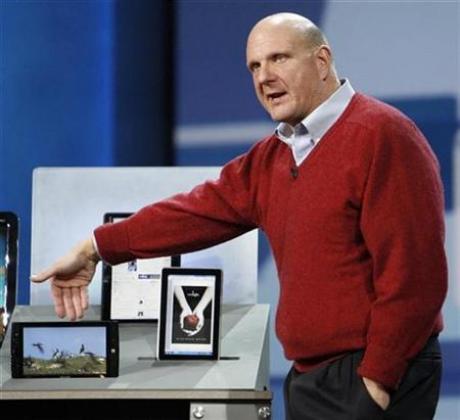 The Apple iPad has quickly become ubiquitous and Android tablets will surely enjoy some popularity too. Not to sit idly by, Steve Ballmer is quick to point out that Microsoft has its stake in this arena too. He’s promising that the “new slates with Windows on them” will be shown off to world this Christmas.

Without a giant vein popping out of his forehead, Ballmer is remaining fairly calm about the situation, confident that Microsoft will be hugely competitive in the tablet and slate market. In addressing a group of students, staff, and journalists at the London School of Economics, though, Ballmer did not make any mention of specific hardware or manufacturers.

We think that HP (and Palm) are more inclined to focus on the webOS tablet first, so they might not have a Windows offering right away. Samsung is busy with Android and the Galaxy Tab. LG is taking a “wait and see” approach. So, who is going to make the Windows tablet? Asus? Acer?

Either way, Christmas is only a couple months away, so it won’t be long before we see something for certain. Based on how things are going, a version of Windows Phone 7 would probably be a better idea than a full Windows 7 build.